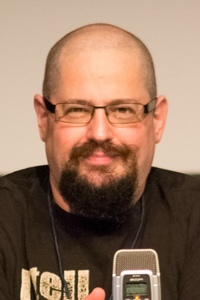 Charles David George “Charlie” Stross is a British writer of science fiction, Lovecraftian horror and fantasy. He specialises in hard science fiction and space opera. His contemporaries include Alastair Reynolds, Ken MacLeod, Liz Williams, Neal Asher and Richard Morgan. Between 1994 and 2004, he was also an active writer for the magazine Computer Shopper and was responsible for the monthly Linux column. Due to time constraints, he eventually had to stop writing for Computer Shopper so that he could devote more time to his novels. Subsequently, he published all his articles on the Internet. (source: Wikipedia)

His most ambitious novel to date, Accelerando is a multi-generational saga following a brilliant clan of 21st-century posthumans. The year is some time ...read more »

Oshi Adjani works for the Boss doing odd jobs, fomenting a revolution here, confronting a mass murderer there. Her field of operations is the Milky Way ...read more »

Toast is a collection of science fiction short stories first published in 2002. The subtitle of the collection refers to the way that predictions of the...read more »