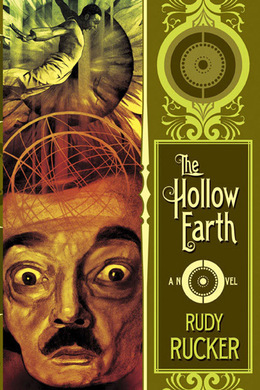 The Narrative of Mason Algiers Reynolds of Virginia

In 1836, Mason Algiers Reynolds leaves his family’s Virginia farm with his father’s slave, a dog, and a mule. Branded a murderer, he finds sanctuary with his hero, Edgar Allan Poe, and together they embark on an extraordinary expedition to the South Pole, and the entrance to the Hollow Earth. It is there, at the center of the world, where strange physics, strange people, and stranger creatures abound, that their bizarre adventures truly begin.

I went to Poe’s funeral yesterday. There was a minister, four mourners, and a grave digger. The grave digger called me a damned nigger and chased me off. Otha should have been there to see.

Eddie wanted to write the account of our “unparalleled journey,” but he’s dead any way you look at it and Otha’s in the Umpteen Seas. That leaves me and Seela living as penniless, free Baltimore Negroes, with the winter of 1849 coming soon. I’m writing as fast as I can.

My name is Mason Algiers Reynolds. I am a white man; I am a Virginia gentleman. My unparalleled journey started thirteen years ago, when I left my father’s farm in Hardware, Virginia. There were five of us on the farm: Pa, me, Otha, Luke, and Turl.

I woke in the dark that last day at home. I’d been dreaming about being buried alive. The dream was tedious more than it was scary. In the dream I couldn’t see anything; I could just hear and feel. First there was the noise of the folks praying over me, and then came the bumping of the coffin being carried out and lowered into the ground. There were some hymns, and then they shoveled the dirt in on me and it was nothing but black.

Right after I woke up, everything felt like a coffin—my bed, my room, Pa’s farm. But then I got happy, remembering that I was fifteen and that tomorrow I would drive the wagon to town.

I got up to pee out the window. The moon was low, and the predawn breeze brought the smell of rainsoft fields. We’d made it through another winter, we Reynoldses, and tomorrow was today. Pa was sending me and Otha to Lynchburg to sell three barrels of whiskey. We needed seeds, a new plow, some books for me, and a wife for Otha if we could find one. All winter I’d had nothing but our accumulated subscription copies of The Southern Literary Messenger to read, which is where, come to think of it, I’d gotten the idea of being buried alive: from Edgar Poe’s tale “Loss of Breath.”

Beneath the surface, my thoughts were still running down the tracks of that bad dream, wondering about the worms that eat corpses. Were corpse worms the same as the purple crawlers that Otha and I used for fishing? Or were corpse worms the fat white grubs with hard heads that bite? I’d once read in the Messenger that if an angel from another star were to come and do a census of Earth, she’d think this was a planet of worms, since there’s more of them than of any other living creature. Beetles would come in second, as I recall.

In the barn, our new-farrowed sow was grunting, warm and slow. I said a prayer and went back to sleep.

Turl woke me up for real, yelling up the stairs that it was time for breakfast. She was a handsome yellow woman who never tired of telling all of us that she was too good to be a slave. According to Turl, her grandmother had been a Hottentot princess and her grandfather a Spanish buccaneer. It was no secret what she thought of the rest of us: Pa was a drunkard, I was a dreamer, Otha a baby, and Luke a mule. The only one of her relatives she ever said anything nice about was her sister’s little son, Purly, at the Perrows’ in Lynchburg. We all put up with her because with Ma dead, Turl was the only woman to care for us men. When she was feeling sweet, she could cook and sew and clean to a fare-thee-well.

But today wasn’t one of Turl’s sweet days. Breakfast was a sloppy cold porridge of watery grits and rank fatback. Turl slapped some of it in bowls for me and Pa, and took the rest of it out to the slave cabin, holding her mouth stiff and stuck out. I was glad to be leaving today.

“How’s the boy, Mason?” said Pa, coming in from the bam. He’d already been out to feed the stock. He was big and strong and he had a black beard. Sometimes I wondered how Ma could have stood to kiss him—in the picture we had of her, she looked so delicate that it seemed like a rough beard would have torn her face. I took after Ma; I was blond and short, with pale brown eyes. Ma’d died aborning me. Occasionally I worried that Pa hated me for it; not that he was ever harsh with me—far from it. Pa could be rough on other men, but he still had his gentleness to let out, and mostly it came to me.

He walked over and rested his callused hand on my neck. “Are you ready for the trip, son?”

“Lord yes, Pa! I’ve been packed for two days! Soon as we eat our breakfast, I’ll help load the barrels into the wagon.”

“Luke and Otha and I can do that, Mason. My boy’s too fine to coarsen up his hands. He’s going to be a university man!”

We sat and ate for a bit, and pretty soon Pa commenced to chuckle. “Tastes like Turl’s upset.”

I stuck my lips out to imitate Turl’s mad face, and Pa laughed harder, making a deep rumbling sound like a bear. I set my dish down on the floor and let Arf finish it. He’d been lying under the table waiting, the way he always did.