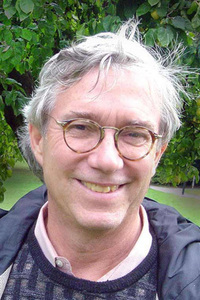 Rudolf von Bitter Rucker is an American mathematician, computer scientist, science fiction author, and philosopher, and is one of the founders of the cyberpunk literary movement. The author of both fiction and non-fiction, he is best known for the novels in the Ware Tetralogy, the first two of which (Software and Wetware) both won Philip K. Dick Awards.

As his “own alternative to cyberpunk,” Rucker developed a writing style he terms: Transrealism, as outlined in his 1983 essay “The Transrealist Manifesto,” is science fiction based on the author’s own life and immediate perceptions, mixed with fantastic elements that symbolize psychological change. Many of Rucker’s novels and short stories apply these ideas.

Rucker often uses his novels to explore scientific or mathematical ideas; White Light examines the concept of infinity, while the Ware Tetralogy (written from 1982 through 2000) is in part an explanation of the use of natural selection to develop software (a subject also developed in his The Hacker and the Ants. His novels also put forward a mystical philosophy that Rucker has summarized in an essay titled, with only a bit of irony, “The Central Teachings of Mysticism”. (source: Wikipedia)

Now, in 2053, ‘moldies’ are the latest robotic advancement–evolved artificial lifeforms made of soft plastic and gene-tweaked molds and algae, so anatom...read more »

It all begins next year in California. A maladjusted computer industry billionaire and a somewhat crazy US President initiate a radical transformation o...read more »

It’s 2054, and Phil Gottner doesn’t know where his life is. His girlfriend is hooked on merge, a drug used in ‘bacteria-style’ sex. His father has just ...read more »

Cobb Anderson created the ‘boppers,’ sentient robots that overthrew their human overlords. But now Cobb is just an aging alcoholic waiting to die, and t...read more »

In 1836, Mason Algiers Reynolds leaves his family’s Virginia farm with his father’s slave, a dog, and a mule. Branded a murderer, he finds sanctuary wit...read more »

What if Alan Turing, founder of the modern computer age, escaped assassination by the secret service to become the lover of Beat author William Burrough...read more »

In 2030, bopper robots in their lunar refuge have founds a way to infuse DNA wetware with their own software code. The result is a new lifeform: the mea...read more »