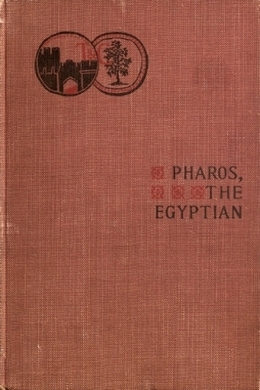 The plague is spreading across Europe – a plague as vile and vicious as the plagues of the middle ages. It is a plague more virulent than any childhood disease: everyone will catch it; everyone who catches it will die. But this is no ordinary plague: it is the work of a sorcerer – a man of exactly the stripe as Boothby’s infamous villain, Nikola. One man knows how it’s spread. One man can stop it – if he can face Pharos, The Egyptian. If he dares, for the life of the world.

If ever a man in this world had a terrible–I might almost go so far as to add a shameful–story to relate, surely I, Cyril Forrester, am the one. How strange–indeed, how most unbelievable–it is I do not think I even realised myself until I sat down to write it. The question the world will in all probability ask when it has read it is, why it should have been told at all. It is possible it may be of opinion that I should have served my generation just as well had I allowed it to remain locked up in my own bosom for all time. This, however, my conscience would not permit. There are numberless reasons, all of them important and some imperative beyond all telling, why I should make my confession, though God knows I am coward enough to shrink from the task. And if you consider for a moment, I think you will understand why. In the first place, the telling of the story can only have the effect of depriving me of the affection of those I love, the respect of those whose good opinion I have hitherto prized so highly, the sympathy of my most faithful friends, and, what is an equal sacrifice as far as I am personally concerned–though it is, perhaps, of less importance to others–the fame I have won for myself after so hard a struggle. All this is swept away like drift-wood before a rising tide, and as a result I retire into voluntary exile, a man burdened with a life-long sorrow. How I have suffered, both in body and mind, none will ever understand. That I have been punished is also certain, how heavily you, my two old friends, will be able to guess when you have read my story. With the writing of it I have severed the last link that binds me to the civilized world. Henceforth I shall be a wanderer and an outcast, and but for one reason could wish myself dead. But that is enough of regret; let me commence my story.

Two years ago, as you both have terrible reason to remember, there occurred in Europe what may, perhaps, be justly termed the most calamitous period in its history, a time so heart-breaking, that scarcely a man or woman can look back upon it without experiencing the keenest sorrow. Needless to say I refer to the outbreak of the plague among us, that terrible pestilence which swept Europe from end to end, depopulated its greatest cities, filled every burial-place to overflowing, and caused such misery and desolation in all ranks of life as has never before been known among us. Few homes were there, even in this fair England of ours, but suffered some bereavement; few families but mourn a loss the wound of which has even now barely healed. And it is my part in this dreadful business that I have forced myself with so much bitter humiliation to relate. Let me begin at the very beginning, tell everything plainly and straightforwardly, offer nothing in extenuation of my conduct, and trust only to the world to judge me, if such a thing be possible, with an unbiassed mind.

I date my misery from a wet, miserable night in the last week of March–a night without a glimpse of the moon, which, on that particular evening, was almost at its full. There had been but one solitary hour of painting-light all day; short as it was, however, it was sufficient for my purpose. My picture for the Academy was finished, and now all that remained was to pack it up and send it in. It was, as you remember, my eighth, and in every way my most successful effort. The subject I had chosen had enthralled me from the moment it had first entered my head, and the hours of thought and preparation it had entailed will always rank among the happiest of my life. It represented Merenptah, the Pharaoh of the Exodus, learning from the magicians the effect of his obstinacy in the death of his first-born son. The canvas showed him seated on his throne, clad in his robes of state. His head was pushed a little forward, his chin rested in his hand, while his eyes looked straight before him as though he were endeavouring to peer into the future in the hope of reading there the answer to the troubled thoughts inside his brain. Behind him stood the sorcerers, one of whom had found courage to announce the baneful tidings.

The land of Egypt has always possessed a singular attraction for me–a taste which, doubtless, I inherit from my poor father, who, as you are aware, was one of the greatest authorities upon the subject the world has ever known.