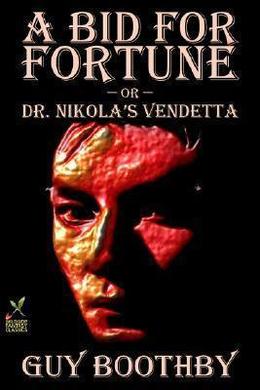 A Bid for Fortune

Richard Hatteras, on holiday in Sydney, rescues a lovely young woman in distress, the start of a series of events that sees him falling in love and becoming ever more entangled in the machinations of the shadowy Doctor Nikola, villain, gentleman, and occult adventurer, who will stop at nothing to steal his prize. Boothby’s Nikola may be the world’s first modern super villain: he is a master of hypnotism and mind control, a telepathic adept, and an astral projectionist. He can cause ordinary men to see images in pools of liquid, and prophesy into the future. It’s said that he knows the hour, moment, and method of his own demise.

First and foremost, my name, age, description, and occupation, as they say in the Police Gazette. Richard Hatteras, at your service, commonly called Dick, of Thursday Island, North Queensland, pearler, copra merchant, beche-de-mer and tortoise-shell dealer, and South Sea trader generally. Eight-and-twenty years of age, neither particularly good-looking nor, if some people are to be believed, particularly amiable, six feet two in my stockings, and forty-six inches round the chest; strong as a Hakodate wrestler, and perfectly willing at any moment to pay ten pounds sterling to the man who can put me on my back.

And big shame to me if I were not so strong, considering the free, open-air, devil-may-care life I’ve led. Why, I was doing man’s work at an age when most boys are wondering when they’re going to be taken out of knickerbockers. I’d been half round the world before I was fifteen, and had been wrecked twice and marooned once before my beard showed signs of sprouting. My father was an Englishman, not very much profit to himself, so he used to say, but of a kindly disposition, and the best husband to my mother, during their short married life, that any woman could possibly have desired. She, poor soul, died of fever in the Philippines the year I was born, and he went to the bottom in the schooner Helen of Troy, a degree west of the Line Islands, within six months of her decease; struck the tail end of a cyclone, it was thought, and went down, lock, stock, and barrel, leaving only one man to tell the tale. So I lost father and mother in the same twelve months, and that being so, when I put my cabbage-tree on my head it covered, as far as I knew, all my family in the world.

Any way you look at it, it’s calculated to give you a turn, at fifteen years of age, to know that there’s not a living soul on the face of God’s globe that you can take by the hand and call relation. That old saying about “Blood being thicker than water” is a pretty true one, I reckon: friends may be kind–they were so to me–but after all they’re not the same thing, nor can they be, as your own kith and kin.

However, I had to look my trouble in the face and stand up to it as a man should, and I suppose this kept me from brooding over my loss as much as I should otherwise have done. At any rate, ten days after the news reached me, I had shipped aboard the Little Emily, trading schooner, for Papeete, booked for five years among the islands, where I was to learn to water copra, to cook my balances, and to lay the foundation of the strange adventures that I am going to tell you about in this book.

After my time expired and I had served my Trading Company on half the mudbanks of the Pacific, I returned to Australia and went up inside the Great Barrier Reef to Somerset–the pearling station that had just come into existence on Cape York. They were good days there then, before all the new-fangled laws that now regulate the pearling trade had come into force; days when a man could do almost as he liked among the islands in those seas. I don’t know how other folk liked it, but the life just suited me–so much so that when Somerset proved inconvenient and the settlement shifted across to Thursday, I went with it, and, what was more to the point, with money enough at my back to fit myself out with a brand new lugger and full crew, so that I could go pearling on my own account.

For many years I went at it head down, and this brings me up to four years ago, when I was a grown man, the owner of a house, two luggers, and as good a diving plant as any man could wish to possess. What was more, just before this I had put some money into a mining concern on the mainland, which had, contrary to most ventures of the sort, turned up trumps, giving me as my share the nice round sum of £5,000. With all this wealth at my back, and having been in harness for a greater number of years on end than I cared to count, I made up my mind to take a holiday and go home to England to see the place where my father was born, and had lived his early life (I found the name of it written in the flyleaf of an old Latin book he left me), and to have a look at a country I’d heard so much about, but never thought to have the good fortune to set my foot upon.

Accordingly I packed my traps, let my house, sold my luggers and gear, intending to buy new ones when I returned, said goodbye to my friends and shipmates, and set off to join an Orient liner in Sydney. You will see from this that I intended doing the thing in style! And why not? I’d got more money to my hand to play with than most of the swells who patronise the first saloon; I had earned it honestly, and was resolved to enjoy myself with it to the top of my bent, and hang the consequences.