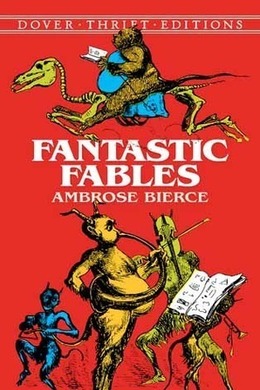 Over 200 fantastic fables from the bitter pen of Ambrose Bierce fill this little volume to overflowing with a rich feast of his misanthropy. Bierce didn’t miss a thing—greedy politicians, thieving doctors, not so pious holy men, aldermen, poets, naturalists, poodles, lions, kangaroos, judges, diplomats, legislators—all fall under close scrutiny in a delicious blend of sarcasm and satire that leaves no institution or pomposity of modern life unscathed. Called the American Swift, Bierce is one of the rare masters of the fable: like Aesop and La Fontaine, often personifying objects, animals, and even abstract concepts to reinforce his satire.

A Moral Principle met a Material Interest on a bridge wide enough for but one.

“Down, you base thing!” thundered the Moral Principle, “and let me pass over you!”

The Material Interest merely looked in the other’s eyes without saying anything.

“Ah,” said the Moral Principle, hesitatingly, “let us draw lots to see which shall retire till the other has crossed.”

The Material Interest maintained an unbroken silence and an unwavering stare.

“In order to avoid a conflict,” the Moral Principle resumed, somewhat uneasily, “I shall myself lie down and let you walk over me.”

Then the Material Interest found a tongue, and by a strange coincidence it was its own tongue. “I don’t think you are very good walking,” it said. “I am a little particular about what I have underfoot. Suppose you get off into the water.”

It occurred that way.

A man lying at the point of death called his wife to his bedside and said:

“I am about to leave you forever; give me, therefore, one last proof of your affection and fidelity, for, according to our holy religion, a married man seeking admittance at the gate of Heaven is required to swear that he has never defiled himself with an unworthy woman. In my desk you will find a crimson candle, which has been blessed by the High Priest and has a peculiar mystical significance. Swear to me that while it is in existence you will not remarry.”

The Woman swore and the Man died. At the funeral the Woman stood at the head of the bier, holding a lighted crimson candle till it was wasted entirely away.

The Blotted Escutcheon and the Soiled Ermine

A Blotted Escutcheon, rising to a question of privilege, said:

“Mr. Speaker, I wish to hurl back an allegation and explain that the spots upon me are the natural markings of one who is a direct descendant of the sun and a spotted fawn. They come of no accident of character, but inhere in the divine order and constitution of things.”

When the Blotted Escutcheon had resumed his seat a Soiled Ermine rose and said:

“Mr. Speaker, I have heard with profound attention and entire approval the explanation of the honourable member, and wish to offer a few remarks on my own behalf. I, too, have been foully calumniated by our ancient enemy, the Infamous Falsehood, and I wish to point out that I am made of the fur of the Mustela maculata, which is dirty from birth.”

Having obtained an audience of the King an Ingenious Patriot pulled a paper from his pocket, saying:

“May it please your Majesty, I have here a formula for constructing armour-plating which no gun can pierce. If these plates are adopted in the Royal Navy our warships will be invulnerable, and therefore invincible. Here, also, are reports of your Majesty’s Ministers, attesting the value of the invention. I will part with my right in it for a million tumtums.”

After examining the papers, the King put them away and promised him an order on the Lord High Treasurer of the Extortion Department for a million tumtums.

“And here,” said the Ingenious Patriot, pulling another paper from another pocket, “are the working plans of a gun that I have invented, which will pierce that armour. Your Majesty’s Royal Brother, the Emperor of Bang, is anxious to purchase it, but loyalty to your Majesty’s throne and person constrains me to offer it first to your Majesty. The price is one million tumtums.”

Having received the promise of another check, he thrust his hand into still another pocket, remarking:

“The price of the irresistible gun would have been much greater, your Majesty, but for the fact that its missiles can be so effectively averted by my peculiar method of treating the armour plates with a new–”

The King signed to the Great Head Factotum to approach.

“Search this man,” he said, “and report how many pockets he has.”

“May it please your Majesty,” cried the Ingenious Patriot, in terror, “one of them contains tobacco.”

“Hold him up by the ankles and shake him,” said the King; “then give him a check for forty-two million tumtums and put him to death. Let a decree issue declaring ingenuity a capital offence.”

The King of Madagao, being engaged in a dispute with the King of Bornegascar, wrote him as follows:

“Before proceeding further in this matter I demand the recall of your Minister from my capital.”

Greatly enraged by this impossible demand, the King of Bornegascar replied:

“I shall not recall my Minister. Moreover, if you do not immediately retract your demand I shall withdraw him!”

This threat so terrified the King of Madagao that in hastening to comply he fell over his own feet, breaking the Third Commandment.