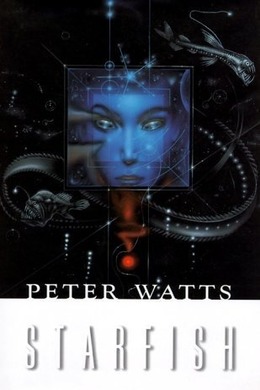 A huge international corporation has developed a facility along the Juan de Fuca Ridge at the bottom of the Pacific Ocean to exploit geothermal power. They send a bio-engineered crew–people who have been altered to withstand the pressure and breathe the seawater–down to live and work in this weird, fertile undersea darkness. Unfortunately the only people suitable for long-term employment in these experimental power stations are crazy, some of them in unpleasant ways. How many of them can survive, or will be allowed to survive, while worldwide disaster approaches from below?

When the lights go out in Beebe Station, you can hear the metal groan.

Lenie Clarke lies on her bunk, listening. Overhead, past pipes and wires and eggshell plating, three kilometers of black ocean try to crush her. She feels the Rift underneath, tearing open the seabed with strength enough to move a continent. She lies there in that fragile refuge and she hears Beebe’s armor shifting by microns, hears its seams creak not quite below the threshold of human hearing. God is a sadist on the Juan de Fuca Rift, and His name is Physics.

How did they talk me into this? she wonders. Why did I come down here? But she already knows the answer.

She hears Ballard moving out in the corridor. Clarke envies Ballard. Ballard never screws up, always seems to have her life under control. She almost seems happy down here.

Clarke rolls off her bunk and fumbles for a switch. Her cubby floods with dismal light. Pipes and access panels crowd the wall beside her; aesthetics run a distant second to functionality when you’re three thousand meters down. She turns and catches sight of a slick black amphibian in the bulkhead mirror.

It still happens, occasionally. She can sometimes forget what they’ve done to her.

It takes a conscious effort to feel the machines lurking where her left lung used to be. She’s so acclimated to the chronic ache in her chest, to that subtle inertia of plastic and metal as she moves, that she’s scarcely aware of them any more. She can still feel the memory of what it was to be fully human, and mistake that ghost for honest sensation.

Such respites never last. There are mirrors everywhere in Beebe; they’re supposed to increase the apparent size of one’s personal space. Sometimes Clarke shuts her eyes to hide from the reflections forever being thrown back at her. It doesn’t help. She clenches her lids and feels the corneal caps beneath them, covering her eyes like smooth white cataracts.

She climbs out of her cubby and moves along the corridor to the lounge. Ballard is waiting there, dressed in a diveskin and the usual air of confidence.

Ballard stands up. “Ready to go?”

“Only on paper.” Ballard smiles. “No pecking order down here, Lenie. As far as I’m concerned, we’re equals.” After two days on the rift Clarke is still surprised by the frequency with which Ballard smiles. Ballard smiles at the slightest provocation. It doesn’t always seem real.

Something hits Beebe from the outside.

Ballard’s smile falters. They hear it again; a wet, muffled thud through the station’s titanium skin.

“Maybe we should turn the lights off,” Clarke suggests. She knows they won’t. Beebe’s exterior floodlights burn around the clock, an electric campfire pushing back the darkness. They can’t see it from inside—Beebe has no windows— but somehow they draw comfort from the knowledge of that unseen fire—

—most of the time.

“Remember back in training?” Ballard says over the sound, “When they told us that the fish were usually so—small…”

Her voice trails off. Beebe creaks slightly. They listen for a while. There’s no other sound.

“It must’ve gotten tired,” Ballard says. “You’d think they’d figure it out.” She moves to the ladder and climbs downstairs.

Clarke follows her, a bit impatiently. There are sounds in Beebe that worry her far more than the futile attack of some misguided fish. Clarke can hear tired alloys negotiating surrender. She can feel the ocean looking for a way in. What if it finds one? The whole weight of the Pacific could drop down and turn her into jelly. Any time.

Better to face it outside, where she knows what’s coming. All she can do in here is wait for it to happen.