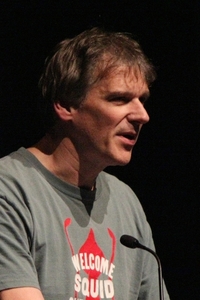 Watts is a Canadian science fiction author and marine-mammal biologist. His first novel Starfish was then followed with the sequels, βehemoth: β-Max and βehemoth: Seppuku. These comprise a trilogy usually referred to as “Rifters” after the modified humans designed to work in deep-ocean environments. Watts’ novel Blindsight was nominated for a 2006 Hugo Award, and has been described by Charles Stross; “Imagine a neurobiology-obsessed version of Greg Egan writing a first contact with aliens story from the point of view of a zombie posthuman crewman aboard a starship captained by a vampire, with not dying as the boobie prize.” Echopraxia, released in 2014 is a “sidequel” about events happening on Earth and elsewhere concurrent with the events in Blindsight.

In addition to his novels and short stories, Watts has also worked in other media. He was peripherally involved in the early stages of the animated science fiction film and television project Strange Frame, and also worked briefly with Relic Entertainment on one of the early drafts of the story that would eventually, years later, become Homeworld 2. The creative director of Bioshock 2 has cited Watts’s work as an influence on that game.

Five years ago you destroyed the world. The world had it coming. So you brought back a gift from the deep sea, a doomsday microbe to throw the planet ...read more »

It’s been two months since a myriad of alien objects clenched about the Earth, screaming as they burned. The heavens have been silent since - until a de...read more »

An enormous tidal wave on the west coast of North America has just killed thousands. Lenie Clarke, in a black wetsuit, walks out of the ocean onto a Pac...read more »

A huge international corporation has developed a facility along the Juan de Fuca Ridge at the bottom of the Pacific Ocean to exploit geothermal power. T...read more »