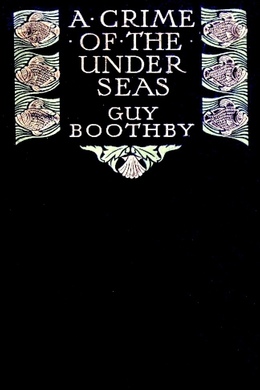 A Crime of the Under-seas

Boothby was and still is a delightful writer. In this collection you can enjoy some of his finest tales, including; * A Crime of the Underseas * The Phantom Stockman * The Treasure of Sacramento Nick * Into the Outer Darkness * The Story of Tommy Dodd and ‘The Rooster’ * Quod Erat Demonstrandum * Cupid and Psyche * Misplaced Affections * In Great Waters * Mr. Aristocrat * This Man and This Woman

There is an old saying that “one half of the world does not know how the other half lives,” but how true this is very few of us really understand. In the East, indeed, it amounts almost to the marvellous. There are men engaged in trades there, some of them highly lucrative, of which the world in general has never heard, and which the ordinary stay-at-home Englishman would in all probability refuse to believe, even if the most trustworthy evidence were placed before him. For instance, on the evening from which I date the story I am now about to tell you, three of us were seated chatting together in the verandah of the Grand Oriental Hotel at Colombo. We were all old friends, and we had each of us arrived but recently in Ceylon. McDougall, the big red-haired Scotchman, who was sitting on my right, had put in an appearance from Tuticorin by a British India boat only that morning, and was due to leave again for Burmah the following night. As far as I could gather he earned his living mainly by smuggling dutiable articles into other countries, where the penalty, if one is caught, is a fine of at least one thousand pounds, or the chance of receiving upwards of five years’ imprisonment. The man in the big chair next to him was Callingway, a Londoner, who had hailed the day before from South America, travelling in a P. and O. steamer from Australia. He was tracking an absconding Argentine Bank Manager, and, as it afterwards transpired, was, when we came in contact with him, on the point of getting possession of the money with which the other had left the country. Needless to say he was not a Government servant, nor were the Banking Company in question aware of his endeavours. Lastly there was myself, Christopher Collon, aged thirty-six, whose walk in life was even stranger, if such a thing were possible, than those of the two men I have just described. One thing at any rate is certain, and that is that if I had been called upon to give an accurate description of myself and my profession at that time, I should have found it extremely difficult to do so. Had I been the possessor of a smart London office, a private secretary, and half a dozen corresponding clerks, I should probably have called myself a private detective on a large scale, or, as they put it in the advertisement columns of our daily papers, a Private Enquiry Agent. Yet that description would scarcely have suited me; I was that and something more. At any rate it was a pretty hard life, and by the same token a fairly hazardous one. This will be the better understood when I say that one day I might receive a commission by cablegram from some London firm, who, we will suppose, had advanced goods to an Indian Rajah, and were unable to obtain payment for them. It was my business to make my way to his headquarters as soon as possible, and to get the money out of him by the best means in my power, eating nothing but what was cooked for me by my own servant meanwhile. As soon as I had done with him I might be sent on very much the same sort of errand to a Chinese Mandarin in Hankow or Canton, or possibly to worry a gold mining concession, or something of the sort, out of one of the innumerable Sultans of the protected Malayan States, those charming places where the head of the State asks you to dinner at six and you are found at midnight with six inches of cold krise in your abdomen. On one occasion I remember being sent from Singapore to Kimberley at three hours’ notice to meet and escort a Parsee diamond merchant from that town to Calcutta. And what was funnier still, though we travelled to Cape Town together, and even shared the same cabin on board the steamer afterwards, he never for an instant suspected that I was spying upon him. Oftentimes I used to wonder what he would have thought, had he only guessed that I knew he was carrying upwards of a million pounds worth of diamonds in the simple leather belt he wore next to his skin, and that every night I used, when he was asleep, to convince myself that everything was right and that the stones were still there. His was a precious life that voyage, at least so his friends in Calcutta thought, and if I could only tell you all that happened during our intercourse, you would not wonder that I was glad when we reached India, and I had handed him over to the chief partners of his firm. But there, if I were to go on telling you my adventures, I should be talking from now to Christmas. Rather let me get to the matter in hand, beside which everything I had ever attempted hitherto ranks as nothing. When I have done I think you will admit that the familiar saying, embodied in my first sentence, should be altered from “one half the world does not know how the other half lives” to “one half the world does not know how the other half gets its living.” There is a distinction with a good deal of difference.