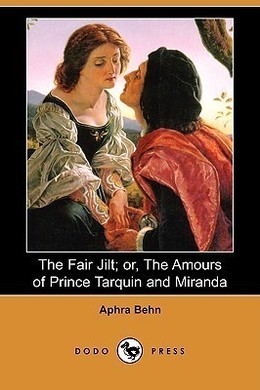 The Amours of Prince Tarquin and Miranda

The story of a charming, daring, and determined lady who contemplates even murder to attain her love. It is all in vain, however, and her love transforms later into aggressive hatred. These Orders are taken up by the best Persons of the Town, young Maids of Fortune, who live together, not inclos’d, but in Palaces that will hold about fifteen hundred or two thousand of these Fille-Devotes, where they have a regulated Government, under a sort of Abbess, or Prioress; or rather, a Governante. They are oblig’d to a Method of Devotion, and are under a sort of Obedience.

As Love is the most noble and divine Passion of the Soul, so it is that to which we may justly attribute all the real Satisfactions of Life; and without it Man is unfinish’d and unhappy.

There are a thousand things to be said of the Advantages this generous Passion brings to those, whose Hearts are capable of receiving its soft Impressions; for ‘tis not every one that can be sensible of its tender Touches. How many Examples, from History and Observation, could I give of its wondrous Power; nay, even to a Degree of Transmigration! How many Idiots has it made wise! How many Fools eloquent! How many home-bred Squires accomplish’d! How many Cowards brave! And there is no sort of Species of Mankind on whom it cannot work some Change and Miracle, if it be a noble well-grounded Passion, except on the Fop in Fashion, the harden’d incorrigible Fop; so often wounded, but never reclaim’d: For still, by a dire Mistake, conducted by vast Opiniatrety, and a greater Portion of Self-love, than the rest of the Race of Man, he believes that Affectation in his Mein and Dress, that Mathematical Movement, that Formality in every Action, that a Face manag’d with Care, and soften’d into Ridicule, the languishing Turn, the Toss, and the Back-shake of the Periwig, is the direct Way to the Heart of the fine Person he adores; and instead of curing Love in his Soul, serves only to advance his Folly; and the more he is enamour’d, the more industriously he assumes (every Hour) the Coxcomb. These are Love’s Play-things, a sort of Animals with whom he sports; and whom he never wounds, but when he is in good Humour, and always shoots laughing. ‘Tis the Diversion of the little God, to see what a Fluttering and Bustle one of these Sparks, new-wounded, makes; to what fantastick Fooleries he has Recourse: The Glass is every Moment call’d to counsel, the Valet consulted and plagu’d for new Invention of Dress, the Footman and Scrutore perpetually employ’d; Billet-doux and Madrigals take up all his Mornings, till Play-time in dressing, till Night in gazing; still, like a Sun-flower, turn’d towards the Beams of the fair Eyes of his Cælia, adjusting himself in the most amorous Posture he can assume, his Hat under his Arm, while the other Hand is put carelesly into his Bosom, as if laid upon his panting Heart; his Head a little bent to one Side, supported with a World of Cravat-string, which he takes mighty Care not to put into Disorder; as one may guess by a never-failing and horrid Stiffness in his Neck; and if he had any Occasion to look aside, his whole Body turns at the same Time, for Fear the Motion of the Head alone should incommode the Cravat or Periwig: And sometimes the Glove is well manag’d, and the white Hand display’d. Thus, with a thousand other little Motions and Formalities, all in the common Place or Road of Foppery, he takes infinite Pains to shew himself to the Pit and Boxes, a most accomplish’d Ass. This is he, of all human Kind, on whom Love can do no Miracles, and who can no where, and upon no Occasion, quit one Grain of his refin’d Foppery, unless in a Duel, or a Battle, if ever his Stars should be so severe and ill-manner’d, to reduce him to the Necessity of either: Fear then would ruffle that fine Form he had so long preserv’d in nicest Order, with Grief considering, that an unlucky Chance-wound in his Face, if such a dire Misfortune should befal him, would spoil the Sale of it for ever.

Perhaps it will be urg’d, that since no Metamorphosis can be made in a Fop by Love, you must consider him one of those that only talks of Love, and thinks himself that happy Thing, a Lover; and wanting fine Sense enough for the real Passion, believes what he feels to be it. There are in the Quiver of the God a great many different Darts; some that wound for a Day, and others for a Year; they are all fine, painted, glittering Darts, and shew as well as those made of the noblest Metal; but the Wounds they make reach the Desire only, and are cur’d by possessing, while the short-liv’d Passion betrays the Cheat. But ‘tis that refin’d and illustrious Passion of the Soul, whose Aim is Virtue, and whose end is Honour, that has the Power of changing Nature, and is capable of performing all those heroick Things, of which History is full.

How far distant Passions may be from one another, I shall be able to make appear in these following Rules. I’ll prove to you the strong Effects of Love in some unguarded and ungovern’d Hearts; where it rages beyond the Inspirations of a God all soft and gentle, and reigns more like a Fury from Hell.