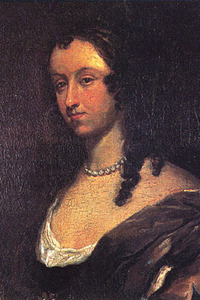 Aphra Behn was a major British author from the Restoration era, writing under the pastoral pseudonym Astrea. As a leading dramatist, coterie poet, translator and proto-novelist, she contributed many important literary works. She was also one of the first English women to earn her living by her writing, breaking cultural barriers, and serving as a literary role model for later generations of women authors. Behn is famously remembered in Virginia Woolf’s A Room of One’s Own: “All women together ought to let flowers fall upon the tomb of Aphra Behn which is, most scandalously but rather appropriately, in Westminster Abbey, for it was she who earned them the right to speak their minds.”. Although her sensational biography has often overshadowed her literary achievements, much solid bibliographical and critical work has been done since the 1990s to establish her oeuvre and its value. (source: Wikipedia)

Love-Letters Between a Nobleman and His Sister (1687)

An epistolary novel - the first ever written - and an innovative and pioneering work. An exploration of the sexual politics of seventeenth century Engli...read more »

Being an account from Lycidus to Lysander, of his voyage from the Island of Love: from the French / by the same author of The voyage to the Isle of Love.

When Prince Oroonoko’s passion for the virtuous Imoinda arouses the jealousy of his grandfather, the lovers are cast into slavery and transported from A...read more »

Set in Florence, and preoccupied with the collision of rampant sexuality and women’s virtue, Behn’s second play parodies the aristocratic attitudes of C...read more »

A comedy of manners which caused offence for its immorality at the time of it’s first performance. Though it conforms to the general rules of Restoratio...read more »

Sil. Why–I would have thee do–I know not what– Still to be with me–yet that will not satisfie; To let me–look upon thee–still that’s not enough. I dare ...read more »

The story of a charming, daring, and determined lady who contemplates even murder to attain her love. It is all in vain, however, and her love transform...read more »

Don Carlos, Governor of Cadiz, has been contracted to Julia, currently married to the rich old Francisco, and in order to gain her, mans a captured Turk...read more »

Behn’s remarkable work in which she analyzes the retribution of breaking the vows, particularly the religious vows undertaken by nuns. The tale, claimed...read more »

This is above all, an indictment of arranged marriages. Young Leticia Bredwell has been purchased as a bride for the revoltingly foppish old Sir Feeble ...read more »

Mrs. Behn has (quite legitimately) made considerable departures from strict historical fact and the sequence of events for her dramatic purposes. Lamber...read more »

Now considered Behn’s most famous and most accomplished play, The Rover is in many ways firmly in the tradition of Restoration drama; Willmore, the titl...read more »

Materially founded upon George Wilkins’ popular play, The Miseries of Enforced Marriage. Sir Timothy himself is moulded to some extent upon Sir Francis ...read more »

Mirtilla, the Amorous Jilt, who had once been attached to George Marteen, the Younger Brother, married for a convenience the clownish Sir Morgan Blunder...read more »