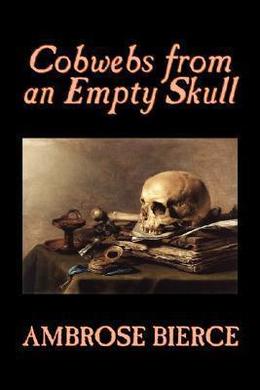 Cobwebs from an Empty Skull

A collection of short fables and stories written under Bierce’s pseudonym, Dod Grile, and although one of his earliest published books, it still displays the wit and cynicism which colors his writing. The book is divided into three sections: Fables of Zambri, the Parsee, an assortment of over 100 fables; Brief Seasons of Intellectual Dissipation, discussions between a fool and a philosopher, a doctor and a soldier, respectively; and Divers Tales, 28 different stories of an eclectic nature, including The Grateful Bear, Dr. Deadwood, I Presume, Mrs. Dennison’s Head, and Jim Beckwourth’s Pond.

A certain Persian nobleman obtained from a cow gipsy a small oyster. Holding him up by the beard, he addressed him thus:

“You must try to forgive me for what I am about to do; and you might as well set about it at once, for you haven’t much time. I should never think of swallowing you if it were not so easy; but opportunity is the strongest of all temptations. Besides, I am an orphan, and very hungry.”

“Very well,” replied the oyster; “it affords me genuine pleasure to comfort the parentless and the starving. I have already done my best for our friend here, of whom you purchased me; but although she has an amiable and accommodating stomach, we couldn’t agree. For this trifling incompatibility–would you believe it?–she was about to stew me! Saviour, benefactor, proceed.”

“I think,” said the nobleman, rising and laying down the oyster, “I ought to know something more definite about your antecedents before succouring you. If you couldn’t agree with your mistress, you are probably no better than you should be.”

People who begin doing something from a selfish motive frequently drop it when they learn that it is a real benevolence.

A rat seeing a cat approaching, and finding no avenue of escape, went boldly up to her, and said:

“Madam, I have just swallowed a dose of powerful bane, and in accordance with instructions upon the label, have come out of my hole to die. Will you kindly direct me to a spot where my corpse will prove peculiarly offensive?”

“Since you are so ill,” replied the cat, “I will myself transport you to a spot which I think will suit.”

So saying, she struck her teeth through the nape of his neck and trotted away with him. This was more than he had bargained for, and he squeaked shrilly with the pain.

“Ah!” said the cat, “a rat who knows he has but a few minutes to live, never makes a fuss about a little agony. I don’t think, my fine fellow, you have taken poison enough to hurt either you or me.”

So she made a meal of him.

If this fable does not teach that a rat gets no profit by lying, I should be pleased to know what it does teach.

A frog who had been sitting up all night in neighbourly converse with an echo of elegant leisure, went out in the grey of the morning to obtain a cheap breakfast. Seeing a tadpole approach,

“Halt!” he croaked, “and show cause why I should not eat you.”

The tadpole stopped and displayed a fine tail.

“Enough,” said the frog: “I mistook you for one of us; and if there is anything I like, it is frog. But no frog has a tail, as a matter of course.”

While he was speaking, however, the tail ripened and dropped off, and its owner stood revealed in his edible character.

“Aha!” ejaculated the frog, “so that is your little game! If, instead of adopting a disguise, you had trusted to my mercy, I should have spared you. But I am down upon all manner of deceit.”

And he had him down in a moment.

Learn from this that he would have eaten him anyhow.

An old man carrying, for no obvious reason, a sheaf of sticks, met another donkey whose cargo consisted merely of a bundle of stones.

“Suppose we swop,” said the donkey.

“Very good, sir,” assented the old man; “lay your load upon my shoulders, and take off my parcel, putting it upon your own back.”

The donkey complied, so far as concerned his own encumbrance, but neglected to remove that of the other.

“How clever!” said the merry old gentleman, “I knew you would do that. If you had done any differently there would have been no point to the fable.”

And laying down both burdens by the roadside, he trudged away as merry as anything.

An elephant meeting a mouse, reproached him for not taking a proper interest in growth.

“It is all very well,” retorted the mouse, “for people who haven’t the capacity for anything better. Let them grow if they like; but I prefer toasted cheese.”

The stupid elephant, not being able to make very much sense of this remark, essayed, after the manner of persons worsted at repartee, to set his foot upon his clever conqueror. In point of fact, he did set his foot upon him, and there wasn’t any more mouse.

The lesson imparted by this fable is open, palpable: mice and elephants look at things each after the manner of his kind; and when an elephant decides to occupy the standpoint of a mouse, it is unhealthy for the latter.