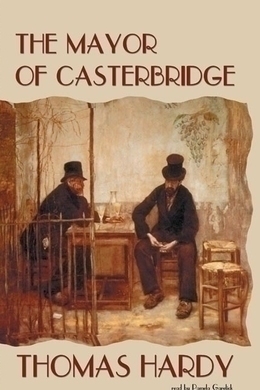 The Mayor of Casterbridge

The Life and Death of a Man of Character

Thomas Hardy’s almost supernatural insight into the course of wayward lives, his instinctive feeling for the beauty of the rural landscape, and his power to invest that landscape with moral significance all came together in an utterly fluent way in The Mayor of Casterbridge. A classically shaped story about the rise and fall of the brooding and sometimes brutal Michael Henchard in the harsh world of nineteenth-century rural England, The Mayor of Casterbridge is an emblematic product of Hardy’s maturity–vigorous, forceful, and unclouded by illusions.

One evening of late summer, before the nineteenth century had reached one-third of its span, a young man and woman, the latter carrying a child, were approaching the large village of Weydon-Priors, in Upper Wessex, on foot. They were plainly but not ill clad, though the thick hoar of dust which had accumulated on their shoes and garments from an obviously long journey lent a disadvantageous shabbiness to their appearance just now.

The man was of fine figure, swarthy, and stern in aspect; and he showed in profile a facial angle so slightly inclined as to be almost perpendicular. He wore a short jacket of brown corduroy, newer than the remainder of his suit, which was a fustian waistcoat with white horn buttons, breeches of the same, tanned leggings, and a straw hat overlaid with black glazed canvas. At his back he carried by a looped strap a rush basket, from which protruded at one end the crutch of a hay-knife, a wimble for hay-bonds being also visible in the aperture. His measured, springless walk was the walk of the skilled countryman as distinct from the desultory shamble of the general labourer; while in the turn and plant of each foot there was, further, a dogged and cynical indifference personal to himself, showing its presence even in the regularly interchanging fustian folds, now in the left leg, now in the right, as he paced along.

What was really peculiar, however, in this couple’s progress, and would have attracted the attention of any casual observer otherwise disposed to overlook them, was the perfect silence they preserved. They walked side by side in such a way as to suggest afar off the low, easy, confidential chat of people full of reciprocity; but on closer view it could be discerned that the man was reading, or pretending to read, a ballad sheet which he kept before his eyes with some difficulty by the hand that was passed through the basket strap. Whether this apparent cause were the real cause, or whether it were an assumed one to escape an intercourse that would have been irksome to him, nobody but himself could have said precisely; but his taciturnity was unbroken, and the woman enjoyed no society whatever from his presence. Virtually she walked the highway alone, save for the child she bore. Sometimes the man’s bent elbow almost touched her shoulder, for she kept as close to his side as was possible without actual contact, but she seemed to have no idea of taking his arm, nor he of offering it; and far from exhibiting surprise at his ignoring silence she appeared to receive it as a natural thing. If any word at all were uttered by the little group, it was an occasional whisper of the woman to the child–a tiny girl in short clothes and blue boots of knitted yarn–and the murmured babble of the child in reply.

The chief–almost the only–attraction of the young woman’s face was its mobility. When she looked down sideways to the girl she became pretty, and even handsome, particularly that in the action her features caught slantwise the rays of the strongly coloured sun, which made transparencies of her eyelids and nostrils and set fire on her lips. When she plodded on in the shade of the hedge, silently thinking, she had the hard, half-apathetic expression of one who deems anything possible at the hands of Time and Chance except, perhaps, fair play. The first phase was the work of Nature, the second probably of civilization.

That the man and woman were husband and wife, and the parents of the girl in arms there could be little doubt. No other than such relationship would have accounted for the atmosphere of stale familiarity which the trio carried along with them like a nimbus as they moved down the road.

The wife mostly kept her eyes fixed ahead, though with little interest–the scene for that matter being one that might have been matched at almost any spot in any county in England at this time of the year; a road neither straight nor crooked, neither level nor hilly, bordered by hedges, trees, and other vegetation, which had entered the blackened-green stage of colour that the doomed leaves pass through on their way to dingy, and yellow, and red. The grassy margin of the bank, and the nearest hedgerow boughs, were powdered by the dust that had been stirred over them by hasty vehicles, the same dust as it lay on the road deadening their footfalls like a carpet; and this, with the aforesaid total absence of conversation, allowed every extraneous sound to be heard.

For a long time there was none, beyond the voice of a weak bird singing a trite old evening song that might doubtless have been heard on the hill at the same hour, and with the self-same trills, quavers, and breves, at any sunset of that season for centuries untold. But as they approached the village sundry distant shouts and rattles reached their ears from some elevated spot in that direction, as yet screened from view by foliage.