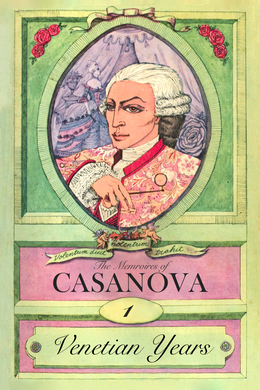 Born in 1725 to Italian and Spanish parentage, Giacomo Casanova lived a long and exciting life. As a scholar and an adventurer, he traveled widely throughout Europe and Russia associating with rulers and Kings. For a time he was in the service of the army and he became a great political stirrer. But he vacillated between fortune and misfortune, often resorting to gaming and loafing about. But Casanova is of course best known for his womanizing, and the writing in The Venetian Years is remarkably modern, accessible, and funny. It took him 18 years to write his memoirs and another 100 for them to be classified as genuine. Brilliantly brought to life by the effervescent Benedict Cumberbatch, this first volume of Casanova charts his childhood and life as a young man in Italy.

Don Jacob Casanova, the illegitimate son of Don Francisco Casanova, was a native of Saragosa, the capital of Aragon, and in the year of 1428 he carried off Dona Anna Palofax from her convent, on the day after she had taken the veil. He was secretary to King Alfonso. He ran away with her to Rome, where, after one year of imprisonment, the pope, Martin III., released Anna from her vows, and gave them the nuptial blessing at the instance of Don Juan Casanova, majordomo of the Vatican, and uncle of Don Jacob. All the children born from that marriage died in their infancy, with the exception of Don Juan, who, in 1475, married Donna Eleonora Albini, by whom he had a son, Marco Antonio.

In 1481, Don Juan, having killed an officer of the king of Naples, was compelled to leave Rome, and escaped to Como with his wife and his son; but having left that city to seek his fortune, he died while traveling with Christopher Columbus in the year 1493.

Marco Antonio became a noted poet of the school of Martial, and was secretary to Cardinal Pompeo Colonna.

The satire against Giulio de Medicis, which we find in his works, having made it necessary for him to leave Rome, he returned to Como, where he married Abondia Rezzonica. The same Giulio de Medicis, having become pope under the name of Clement VII, pardoned him and called him back to Rome with his wife. The city having been taken and ransacked by the Imperialists in 1526, Marco Antonio died there from an attack of the plague; otherwise he would have died of misery, the soldiers of Charles V. having taken all he possessed. Pierre Valerien speaks of him in his work ‘de infelicitate litteratorum’.

Three months after his death, his wife gave birth to Jacques Casanova, who died in France at a great age, colonel in the army commanded by Farnese against Henri, king of Navarre, afterwards king of France. He had left in the city of Parma a son who married Theresa Conti, from whom he had Jacques, who, in the year 1681, married Anna Roli. Jacques had two sons, Jean-Baptiste and Gaetan-Joseph-Jacques. The eldest left Parma in 1712, and was never heard of; the other also went away in 1715, being only nineteen years old.

This is all I have found in my father’s diary: from my mother’s lips I have heard the following particulars:

Gaetan-Joseph-Jacques left his family, madly in love with an actress named Fragoletta, who performed the chambermaids. In his poverty, he determined to earn a living by making the most of his own person. At first he gave himself up to dancing, and five years afterwards became an actor, making himself conspicuous by his conduct still more than by his talent.

Whether from fickleness or from jealousy, he abandoned the Fragoletta, and joined in Venice a troop of comedians then giving performances at the Saint-Samuel Theatre. Opposite the house in which he had taken his lodging resided a shoemaker, by name Jerome Farusi, with his wife Marzia, and Zanetta, their only daughter–a perfect beauty sixteen years of age. The young actor fell in love with this girl, succeeded in gaining her affection, and in obtaining her consent to a runaway match. It was the only way to win her, for, being an actor, he never could have had Marzia’s consent, still less Jerome’s, as in their eyes a player was a most awful individual. The young lovers, provided with the necessary certificates and accompanied by two witnesses, presented themselves before the Patriarch of Venice, who performed over them the marriage ceremony. Marzia, Zanetta’s mother, indulged in a good deal of exclamation, and the father died broken-hearted.

The following April my mother left me under the care of her own mother, who had forgiven her as soon as she had heard that my father had promised never to compel her to appear on the stage. This is a promise which all actors make to the young girls they marry, and which they never fulfil, simply because their wives never care much about claiming from them the performance of it. Moreover, it turned out a very fortunate thing for my mother that she had studied for the stage, for nine years later, having been left a widow with six children, she could not have brought them up if it had not been for the resources she found in that profession.

I was only one year old when my father left me to go to London, where he had an engagement. It was in that great city that my mother made her first appearance on the stage, and in that city likewise that she gave birth to my brother Francois, a celebrated painter of battles, now residing in Vienna, where he has followed his profession since 1783.