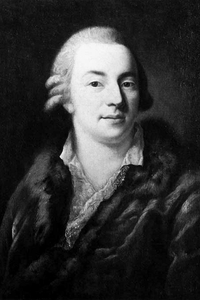 Giacomo Girolamo Casanova was an Italian adventurer and author from the Republic of Venice. His autobiography, Histoire de ma vie (Story of My Life), is regarded as one of the most authentic sources of the customs and norms of European social life during the 18th century.

As was not uncommon at the time, Casanova, depending on circumstances, used more or less fictitious names such as baron or count of Farussi (the name of his mother) or Chevalier de Seingalt (pronounced Saint-Galle, as in French). He often signed his works Jacques Casanova de Seingalt after he began writing in French following his second exile from Venice.

He has become so famous for his often complicated and elaborate affairs with women that his name is now synonymous with “womanizer”. He associated with European royalty, popes and cardinals, along with luminaries such as Voltaire, Goethe, and Mozart. He spent his last years in Bohemia as a librarian in Count Waldstein’s household, where he also wrote the story of his life. (source: Wikipedia)

This earthquake shock was the result of those which at the same time destroyed Lisbon. The Leads, used for the confinement of state prisoners, are in fa...read more »

There is no one like him to introduce the pre revolutionary 18th century to the reader. In our times, most will know him as the complete seducer of wome...read more »

I had two objects in speaking thus: I wanted to frighten him and to make him jealous of me. I felt certain that a man in a passion of jealousy would be ...read more »

In this unique travelogue, Casanova explains his experiences in Holland and Germany. This is a work that examines the two countries, their culture, soci...read more »

I Resolve to become a monk, going to confessions. I alter my mind and dine with the Abbot. Upon leanving for Zurich - comic adventures at Baden. i act i...read more »

M. de Voltaire; my discussions with that Great Man. The Syndic and the three girls, and then the dispute with Voltaire. My Adventures at Aix, and my sec...read more »

The work revolves around the many travel expeditions undertaken by Casanova. Here he critically analyzes the attitudes and life-styles of the elite of F...read more »

Rich and profound, Casanova’s memoirs are a complete depiction of life. He recounts his expeditions in Italy and his meetings with the elite of the soci...read more »

I Arrive At Naples, and the telling of my Short But Happy Stay at Naples. The Duke de Matalone and My Daughter. My Departure and Return to Florence, and...read more »

My stay at Paris and my departure for Strasburg, where I find the Renaud. My misfortunes at Munich and my sad visit to Augsburg. The girl from Strasburg...read more »

Born in 1725 to Italian and Spanish parentage, Giacomo Casanova lived a long and exciting life. As a scholar and an adventurer, he traveled widely throu...read more »

I give up Agatha to Lord Percy and set out for Milan. The Venetian Barbaro humiliation of The Countess. Plan for a Masquerade. My amour with the fair Ma...read more »

I find Rosalie happy. The signora Isola-Bella, the Cook, Biribi and Irene. Possano is imprisoned Prison. My niece proves to be an old friend of Rosalie’...read more »

I meet the Venetian ambassadors at Lyons, and also Marcoline’s uncle. I then part from Marcoline and set out for Paris, where upon I drive my brother th...read more »

The reader who imagines that at these words rage gave place to love, and that I hastened to obtain the prize, does not know the nature of the passion so...read more »

A Letter from Pauline and the Avenging Parrot. I meet Sara again and have the idea of marrying her and settling in Switzerland. Augusta becomes Lord Pem...read more »

In this episode, Casanova further shares his travel experiences of Russia and Poland. After leaving Riga, Cassanova goes for adventures in St. Petersbur...read more »

This volume includes Casanova’s nearly fatal trip to Spain, his affair with infamous Italian dancer Nina Bergonzi (whom he describes ‘as beautiful as Ve...read more »

I make a mistake and Manucci becomes my mortal foe and seeks his vengeance. I leave Madrid and head to Saragossa, then on to Valentia before arriving in...read more »

Rome, and the Actor’s Punishment. My Amours with Gallimena and then the journey to Soyento. The Florentines are mocked by the King. My Journey to Salern...read more »

After encounters with Madame Denis, Dedini, and Zanovitch, I am obliged to leave Florence. Arriving at Bologna I meet General Albergati. I meet Farinell...read more »

The work revolves around the travel expeditions of a cleric who visits many holy places. Great spiritual attachments and religious passion is reflected ...read more »

It is unknown what happened to the final volumes of Casanova’s manuscripts; did the author die before the work was complete, were they destroyed by hims...read more »

This is a biographical book. I had been careful, on my arrival in Bologna, to take up my quarters at a small inn, so as not to attract any notice, and a...read more »

A Fearful Misfortune, Befalls Me; then Love Cools Down; Casanova eventually leaves Corfu and returns to Venice, and gives up the Army life to become a f...read more »

A scholar, an adventurer, perhaps a Cabalist, a busy stirrer in politics, a gamester, one born for the fairer sex, as he tells us, and born also to be a...read more »

I thought that my newly-found cousin was unknown to me, but when I looked at her with more attention, I fancied I recollected her features. She was the ...read more »

Followed by authorities of the Inquisition, Casanova fled from place to place and landed in Venice. Feeling comfortable in his birth place, he started w...read more »

Episode 8 of Cassanova’s escapades, starts with a meeting of Countess Coronini – a Lover’s Pique – Reconciliation – The First Meeting – a Philosophical ...read more »

Awake in a moment she came to open the door in her smock, and without a light. As I wanted one, I told her to get the flint and steel, which she did, wa...read more »