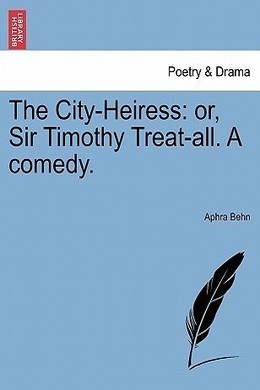 A comedy of manners which caused offence for its immorality at the time of it’s first performance. Though it conforms to the general rules of Restoration comedy, it also keeps Behn’s own highly Royalist political point of view. The play concerns the ‘seditious Knight’, Sir Timothy Treat-all, and his nephew Tom Wilding, who both vye for the affections of Charlot, the eponymous city (London) heiress.

Sir Tim. Trouble me no more: for I am resolv’d, deaf and obdurate, d’ye see, and so forth.

Wild. You will be mortify’d–

Wild. At least hear me out, Sir.

Sir Tim. No, I have heard you out too often, Sir, till you have talkt me out of many a fair Thousand; have had ye out of all the Bayliffs, Serjeants, and Constables Clutches about Town, Sir; have brought you out of all the Surgeons, Apothecaries, and pocky Doctors Hands, that ever pretended to cure incurable Diseases; and have crost ye out of the Books of all the Mercers, Silk-men, Exchange-men, Taylors, Shoemakers, and Sempstresses; with all the rest of the unconscionable City-tribe of the long Bill, that had but Faith enough to trust, and thought me Fool enough to pay.

Sir Char. But, Sir, consider, he’s your own Flesh and Blood.

Sir Char. Your only Heir.

Sir Tim. That’s more than you or any of his wise Associates can tell, Sir.

Sir Char. Why his wise Associates? Have you any Exception to the Company he keeps? This reflects on me and young Dresswell, Sir, Men both of Birth and Fortune.

Sir Tim. Why, good Sir Charles Meriwill, let me tell you, since you’ll have it out, That you and young Dresswell are able to debauch, destroy, and confound all the young imitating Fops in Town.

Sir Tim. Nay, never huff, Sir; for I have six thousand Pound a Year, and value no Man: Neither do I speak so much for your particular, as for the Company you keep, such Tarmagant Tories as these, [To Fop.] who are the very Vermin of a young Heir, and for one tickling give him a thousand bites.

Sir Tim. Yes, you, Sir. Nay, never stare, Sir; I fear you not; No Man’s hectoring signifies this–in the City, but the Constables: no body dares be saucy here, except it be in the King’s name.

Sir Char. Sir, I confess he was to blame.

Sir Tim. Sir Charles, thanks to Heaven, you may be leud, you have a plentiful Estate, may whore, drink, game, and play the Devil: your Uncle, Sir Anthony Meriwill, intends to give you all his Estate too. But for such Sparks as this, and my Fop in Fashion here, why, with what Face, Conscience, or Religion, can they be leud and vitious, keep their Wenches, Coaches, rich Liveries, and so forth, who live upon Charity, and the Sins of the Nation?

Sir Char. If he hath youthful Vices, he has Virtues too.

Sir Tim. Yes, he had, but I know not, you have bewitch’d him Amongst ye. [weeping. Before he fell to Toryism, he was a sober, civil Youth, and had some Religion in him, wou’d read ye Prayers Night and Morning with a laudable Voice, and cry Amen to ‘em; ‘twou’d have done one’s Heart good to have heard him–wore decent Clothes, was drunk but on Sundays and Holidays; and then I had Hopes of him. [Still weeping.

Sir Char. But, Sir, he’s now become a new Man, is casting off all his Women, is drunk not above five or six times a week, swears not above once in a quarter of an Hour, nor has not gam’d this two Days–

Sir Tim. ‘Twas because the Devil was in’s Pocket then.

Sir Char.–Begins to take up at Coffee-houses, talks gravely in the City, speaks scandalously of the Government, and rails most abominably against the Pope and the French King.

Sir Tim. Ay, ay, this shall not wheedle me out of one English Guinea; and so I told him yesterday.

Sir Tim. Yes; by a good Token you were witty upon me, and swore I lov’d and honoured the King no where but on his Coin.

Sir Char. Is it possible, Sir.

Wild. God forgive me, Sir; I confess I was a little overtaken.

Sir Tim. Ay, so it shou’d seem: for he mistook his own Chamber, and went to bed to my Maid’s.

Sir Tim. No, no, he makes his brags on’t, Sir. Oh, that crying Sin of Boasting! Well fare, I say, the Days of old Oliver, he by a wholesom Act made it death to boast; so that then a Man might whore his Heart out, and no body the wiser.

Sir Char. Right, Sir, and then the Men pass’d for sober religious Persons, and the Women for as demure Saints–

Wild. I’ll take care that fault shall be mended, Sir.

Sir Tim. Ay, so will I, if Poverty has any Feats of Mortification; and so farewel to you, Sir. [Going.

Wild. Stay, Sir, are you resolv’d to be so cruel then, and ruin all my Fortunes now depending?