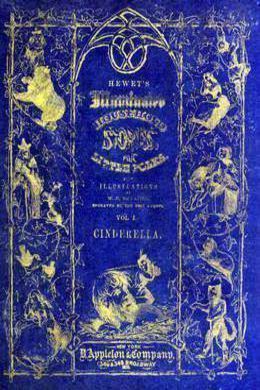 Lost in her day dreams, Cinderella imagines a new life far far way from the evils of her stepsisters and stepmother. But when the prince announces a ball is to be given and Cinderella’s terrible stepsisters refuse to let her attend, Cinderella’s dreams are crushed. That is until her fairy godmother appears and waves her magical wand.

There once lived a gentleman and his wife, who were the parents of a lovely little daughter.

When this child was only nine years of age, her mother fell sick. Finding her death coming on, she called her child to her and said to her, “My child, always be good; bear every thing that happens to you with patience, and whatever evil and troubles you may suffer, you will be happy in the end if you are so.” Then the poor lady died, and her daughter was full of great grief at the loss of a mother so good and kind.

The father too was unhappy, but he sought to get rid of his sorrow by marrying another wife, and he looked out for some prudent lady who might be a second mother to his child, and a companion to himself. His choice fell on a widow lady, of a proud and tyrannical temper, who had two daughters by a former marriage, both as haughty and bad–tempered as their mother. No sooner was the wedding over, than the step–mother began to show her bad temper. She could not bear her step–daughter’s good qualities, that only showed up her daughters’ unamiable ones still more obviously, and she accordingly compelled the poor girl to do all the drudgery of the household. It was she who washed the dishes, and scrubbed down the stairs, and polished the floors in my lady’s chamber and in those of the two pert misses, her daughters; and while the latter slept on good feather beds in elegant rooms, furnished with full–length looking–glasses, their sister lay in a wretched garret on an old straw mattress. Yet the poor thing bore this ill treatment very meekly, and did not dare complain to her father, who thought so much of his wife that he would only have scolded her.

When her work was done, she used to sit in the chimney–corner amongst the cinders, which had caused the nickname of Cinderella to be given her by the family; yet, for all her shabby clothes, Cinderella was a hundred times prettier than her sisters, let them be dressed ever so magnificently.

The poor little Cinder–wench! this harsh stepmother was a sore trial to her; and how often, as she sate sadly by herself, did she feel that there is no mother like our own, the dear parent whose flesh and blood we are, and who bears all our little cares and sorrows tenderly as in the apple of her eye!

It happened that the king’s son gave a ball, to which he invited all the nobility; and, as our two young ladies made a great figure in the world, they were included in the list of invitations. So they began to be very busy choosing what head–dress and which gown would be the most becoming. Here was fresh work for poor Cinderella: for it was she, forsooth, who was to starch and get up their ruffles, and iron all their fine linen; and nothing but dress was talked about for days together. “I,” said the eldest, “shall put on my red velvet dress, with my point–lace trimmings.” “And I,” said the younger sister, “shall wear my usual petticoat, but shall set it off with my gold brocaded train and my circlet of diamonds.”

They sent for a clever tire–woman to prepare the double rows of quilling for their caps, and they purchased a quantity of fashionably cut patches. They called in Cinderella to take her advice, as she had such good taste, and Cinderella not only advised them well, but offered to dress their hair, which they were pleased to accept. While she was thus busied, the sisters said to her: “And pray, Cinderella, would you like to go to the ball?”

“Nay, you are mocking me,” replied the poor girl; “it is not for such as I to go to balls.” “True enough,” rejoined they; “folks would laugh to see a Cinderella at a court ball.”

These two step–sisters were very cruel to Cinderella, and ill–used her much. Ah! what sweet friends are our own born sisters!—there can be no substitutes like them in the whole wide world.

Any other but Cinderella would have dressed their hair awry to punish them for their impertinence, but she was so good–natured that she dressed them most becomingly. Although they disdained her, and while they would themselves make a great figure in the world, sought to degrade and lower her, see how the lovely disposition of Cinderella shines out. Although she was not allowed to go to the ball of the king’s son, she not only advised them well how they could array themselves to appear to the best advantage, but she even—what greatness of heart to do that!—with her own hands dresses their hair, and in the most becoming manner her delicate taste can suggest.

The two sisters were so delighted, that they scarcely ate a morsel for a couple of days. They spent their whole time before a looking–glass, and they would be laced so tight, to make their waists as slender as possible, that more than a dozen stay–laces were broken in the attempt.

The long–wished–for evening came at last, and these proud misses stepped into the carriage and drove away to the palace.