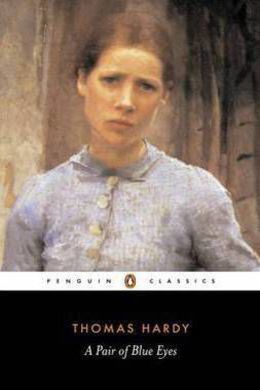 A Pair of Blue Eyes

Elfride finds herself caught in a battle between her heart, her mind and the expectations of her parents and society. The novel is notable for the strong parallels to Hardy and his first wife Emma Gifford. When Elfride’s father finds that his guest and candidate for his daughter’s hand, architect’s assistant Stephen Smith, is the son of a mason, he immediately orders him to leave. This was the third of Hardy’s novels to be published and the first to bear his name. (source: Wikipedia)

Elfride Swancourt was a girl whose emotions lay very near the surface. Their nature more precisely, and as modified by the creeping hours of time, was known only to those who watched the circumstances of her history.

Personally, she was the combination of very interesting particulars, whose rarity, however, lay in the combination itself rather than in the individual elements combined. As a matter of fact, you did not see the form and substance of her features when conversing with her; and this charming power of preventing a material study of her lineaments by an interlocutor, originated not in the cloaking effect of a well-formed manner (for her manner was childish and scarcely formed), but in the attractive crudeness of the remarks themselves. She had lived all her life in retirement–the monstrari gigito of idle men had not flattered her, and at the age of nineteen or twenty she was no further on in social consciousness than an urban young lady of fifteen.

One point in her, however, you did notice: that was her eyes. In them was seen a sublimation of all of her; it was not necessary to look further: there she lived.

These eyes were blue; blue as autumn distance–blue as the blue we see between the retreating mouldings of hills and woody slopes on a sunny September morning. A misty and shady blue, that had no beginning or surface, and was looked INTO rather than AT.

As to her presence, it was not powerful; it was weak. Some women can make their personality pervade the atmosphere of a whole banqueting hall; Elfride’s was no more pervasive than that of a kitten.

Elfride had as her own the thoughtfulness which appears in the face of the Madonna della Sedia, without its rapture: the warmth and spirit of the type of woman’s feature most common to the beauties–mortal and immortal–of Rubens, without their insistent fleshiness. The characteristic expression of the female faces of Correggio–that of the yearning human thoughts that lie too deep for tears–was hers sometimes, but seldom under ordinary conditions.

The point in Elfride Swancourt’s life at which a deeper current may be said to have permanently set in, was one winter afternoon when she found herself standing, in the character of hostess, face to face with a man she had never seen before–moreover, looking at him with a Miranda-like curiosity and interest that she had never yet bestowed on a mortal.

On this particular day her father, the vicar of a parish on the sea-swept outskirts of Lower Wessex, and a widower, was suffering from an attack of gout. After finishing her household supervisions Elfride became restless, and several times left the room, ascended the staircase, and knocked at her father’s chamber-door.

‘Come in!’ was always answered in a hearty out-of-door voice from the inside.

‘Papa,’ she said on one occasion to the fine, red-faced, handsome man of forty, who, puffing and fizzing like a bursting bottle, lay on the bed wrapped in a dressing-gown, and every now and then enunciating, in spite of himself, about one letter of some word or words that were almost oaths; ‘papa, will you not come downstairs this evening?’ She spoke distinctly: he was rather deaf.

‘Afraid not–eh-hh!–very much afraid I shall not, Elfride. Piph-ph-ph! I can’t bear even a handkerchief upon this deuced toe of mine, much less a stocking or slipper–piph-ph-ph! There ‘tis again! No, I shan’t get up till to-morrow.’

‘Then I hope this London man won’t come; for I don’t know what I should do, papa.’

‘Well, it would be awkward, certainly.’

‘I should hardly think he would come to-day.’

‘Because the wind blows so.’

‘Wind! What ideas you have, Elfride! Who ever heard of wind stopping a man from doing his business? The idea of this toe of mine coming on so suddenly!…If he should come, you must send him up to me, I suppose, and then give him some food and put him to bed in some way. Dear me, what a nuisance all this is!’

‘Must he have dinner?’

‘Too heavy for a tired man at the end of a tedious journey.’

‘High tea, then? There is cold fowl, rabbit-pie, some pasties, and things of that kind.’

‘Of course; you are the mistress of the house.’

‘What! sit there all the time with a stranger, just as if I knew him, and not anybody to introduce us?’

‘Nonsense, child, about introducing; you know better than that. A practical professional man, tired and hungry, who has been travelling ever since daylight this morning, will hardly be inclined to talk and air courtesies to-night. He wants food and shelter, and you must see that he has it, simply because I am suddenly laid up and cannot. There is nothing so dreadful in that, I hope? You get all kinds of stuff into your head from reading so many of those novels.’