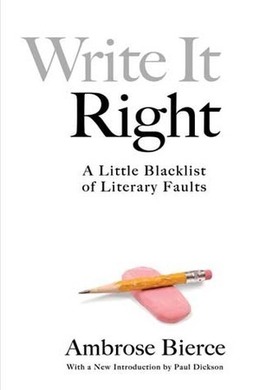 A Little Blacklist of Literary Faults

Several hundred of Bierce’s pet peeves. Bierce’s list includes some distinctions still familiar today–the which-that rule, less vs. fewer, lie and lay – but it also abounds in now-forgotten shibboleths: Ovation, the critics of his time agreed, meant a Roman triumph, not a round of applause. Reliable was an ill-formed coinage, not for the discriminating. Donate was pretentious, jeopardize should be jeopard, demean meant “comport oneself,” not “belittle.” And Bierce made up a few peeves of his own for good measure. We should say “a coating of paint,” he instructed, not “a coat.”

The author’s main purpose in this book is to teach precision in writing; and of good writing (which, essentially, is clear thinking made visible) precision is the point of capital concern. It is attained by choice of the word that accurately and adequately expresses what the writer has in mind, and by exclusion of that which either denotes or connotes something else. As Quintilian puts it, the writer should so write that his reader not only may, but must, understand.

Few words have more than one literal and serviceable meaning, however many metaphorical, derivative, related, or even unrelated, meanings lexicographers may think it worth while to gather from all sorts and conditions of men, with which to bloat their absurd and misleading dictionaries. This actual and serviceable meaning–not always determined by derivation, and seldom by popular usage–is the one affirmed, according to his light, by the author of this little manual of solecisms. Narrow etymons of the mere scholar and loose locutions of the ignorant are alike denied a standing.

The plan of the book is more illustrative than expository, the aim being to use the terms of etymology and syntax as little as is compatible with clarity, familiar example being more easily apprehended than technical precept. When both are employed the precept is commonly given after the example has prepared the student to apply it, not only to the matter in mind, but to similar matters not mentioned. Everything in quotation marks is to be understood as disapproved.

Not all locutions blacklisted herein are always to be reprobated as universal outlaws. Excepting in the case of capital offenders–expressions ancestrally vulgar or irreclaimably degenerate–absolute proscription is possible as to serious composition only; in other forms the writer must rely on his sense of values and the fitness of things. While it is true that some colloquialisms and, with less of license, even some slang, may be sparingly employed in light literature, for point, piquancy or any of the purposes of the skilled writer sensible to the necessity and charm of keeping at least one foot on the ground, to others the virtue of restraint may be commended as distinctly superior to the joy of indulgence.

Precision is much, but not all; some words and phrases are disallowed on the ground of taste. As there are neither standards nor arbiters of taste, the book can do little more than reflect that of its author, who is far indeed from professing impeccability. In neither taste nor precision is any man’s practice a court of last appeal, for writers all, both great and small, are habitual sinners against the light; and their accuser is cheerfully aware that his own work will supply (as in making this book it has supplied) many “awful examples”–his later work less abundantly, he hopes, than his earlier. He nevertheless believes that this does not disqualify him for showing by other instances than his own how not to write. The infallible teacher is still in the forest primeval, throwing seeds to the white blackbirds.