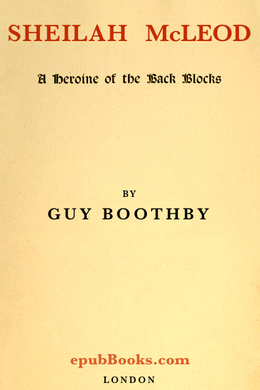 A Heroine of the Back Blocks

Looking back on it now I can recall every circumstance connected with that day just as plainly as if it had all happened but yesterday. In the first place, it was about the middle of the afternoon, and the S.E. trade, which had been blowing lustily since ten o’clock, was beginning to die away according to custom. There had been a slight shower of rain in the forenoon, and now, standing in the verandah of my station looking across the blue lagoon with its fringe of boiling surf, it was my good fortune not only to have before me one of the finest pictures in the South Pacific, but to be able to distinctly smell the sweet perfume of the frangipani blossom and wild lime in the jungle which clothed the hillside behind me. I walked to one end of the verandah and stood watching a group of native girls making tappa outside the nearest hut–then to the other, and glanced into my overflowing copra shed, and from it at the bare shelves of the big trade room opposite…

When first I remember old Barranda Township on the Cargoo River, South–Western Queensland, it was not what it is to–day. There were no grand three–storeyed hotels, with gilded and mirror–hung saloons, and pretty, bright–eyed barmaids, in the main street then; no macadamised roads, no smart villa residences peeping from groves of Moreton Bay fig–trees and stretching for more than a mile out into the country on either side, no gas lamps, no theatre, no School of Arts, no churches or chapels, no Squatters’ Club, and, above all, no railway line connecting it with Brisbane and the outer world. No! There were none of these things. The township, however, lay down in the long gully, beside the winding, ugly creek just as it does to–day—but in those days its site was only a clearing out of the primeval bush; the houses were, to use an Irishism, either tents or slab huts; two hotels certainly graced the main street, but they were grog shanties of the most villainous description, and were only patronised by the riffraff of the country side. The only means of communicating with the metropolis was by the bullock waggons that brought up our stores once every six months, or by riding to the nearest township, one hundred and eight miles distant, and taking the coach from there—a long and wearisome journey that few cared to undertake.

One thing has always puzzled me, and that was how it came about that my father ever settled on the Cargoo. Whatever his reason may have been, however, certain was it that he was one of the earliest to reach the river, a fact which was demonstrated by the significant circumstance that he held possession of the finest site for a house and the pick of all the best country for miles around the township. It was in the earliest days that he made his way out west, and if I have my suspicions of why he came to Australia at all, well, I have always kept them religiously to myself, and intend to go on doing so. But before I say anything about my father, let me tell you what I remember of the old home.

It stood, as I suppose it does to–day, for it is many years since I set eyes on it, on a sort of small tableland or plateau on the hillside, a matter of a hundred yards above the creek, and at just the one spot where it could command a lovely view down the gully and across the roofs of the township towards the distant hills. It was a well–built place of six rooms, constructed of pisa, the only house of that description in the township—and, for that matter, I believe, in the whole district. A broad verandah, covered with the beautiful Wisteria creeper, ran all round it; in front was a large flower garden stretching away to the ford, filled with such plants and shrubs as will grow out in that country; to the right was the horse and cow paddock; and, on the left, the bit of cultivation we always kept going for the summer months, when green food is as valuable as a deposit at the bank. At the rear was another strip of garden with some fine orange and loquot trees, and then, on the other side of the stockyard rails, the thick scrub running up the hillside and extending for miles into the back country. The interior of the house was comfortably furnished, in a style the like of which I have never seen anywhere else in the Bush. I have a faint recollection of hearing that the greater part of it—the chairs, tables, pictures, bookcases and silver—came out from England the year that I was born, and were part of some property my father had inherited. But how much truth there was in this I cannot say. At anyrate, I can remember those chairs distinctly; they were big and curiously shaped, carved all over with a pattern having fruit in it, and each one had a hand clasping a battle–axe on a lozenge on the back—a crest I suppose it must have been, but whose I never took the trouble to inquire. The thing, however, that struck people most about the rooms was the collection of books—there were books in hundreds, in every available place—on the shelves and in the cupboards, on the tables, on the chairs, and even on the floor. There surely never was such a man for books as my father, and I can see him now, standing before a shelf in the half light of the big dining–room with a volume in his hand, studying it as if he were too much entranced to put it down. He was a tall, thin man, with a pale, thoughtful face, a high forehead, deep–set, curious eyes, that seemed to look you through and through, a big, hooked nose (mine is just like it), a handsome mouth, white teeth, and a heavy, determined–looking chin.