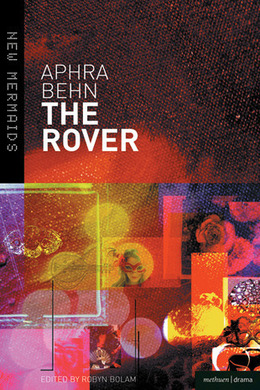 Now considered Behn’s most famous and most accomplished play, The Rover is in many ways firmly in the tradition of Restoration drama; Willmore, the title character, is a rake and a libertine, and the comedy feeds on sexual innuendo, intrigue and wit. But the laughter that the play insights has a biting edge to it and the sexual intrigue an unsettling depth. As Anne Russell points out in her introduction to this edition, there are three options for women in the society represented here: marriage, the convent, or prostitution. In this marriage economy the witty and pragmatic virgin Hellena learns how to survive, while the prostitute Angellica Bianca can retain her autonomy only so long as she remains free from romantic love. It seems that in this world women can only be free by the anonymity of disguise—yet the mask is also the mark of the prostitute. And, paradoxically, disguise is the device that in many ways drives the plot towards marriage. Enormously popular through the eighteenth century, The Rover is now once again widely performed. Filled with the play of ideas, it is one of the most amusing, entertaining—and unsettling—of comedies.

During the exile of Charles II a band of cavaliers, prominent amongst whom are Willmore (the Rover), Belvile, Frederick, and Ned Blunt, find themselves at Naples in carnival time. Belvile, who at a siege at Pampluna has rescued a certain Florinda and her brother Don Pedro, now loves the lady, and the tender feeling is reciprocated. Florinda’s father, however, designs her for the elderly Vincentio, whilst her brother would have her marry his friend Antonio, son to the Viceroy. Florinda, her sister Hellena (who is intended for the veil), their cousin Valeria, and duenna Callis surreptitiously visit the carnival, all in masquerade, and there encounter the cavaliers. Florinda arranges to meet Belvile that night at her garden-gate. Meanwhile a picture of Angelica Bianca, a famous courtezan, is publicly exposed, guarded by bravos. Antonio and Pedro dispute who shall give the 1000 crowns she demands, and come to blows. After a short fray Willmore, who has boldly pulled down the picture, is admitted to the house, and declares his love, together with his complete inability to pay the price she requires. Angelica, none the less, overcome with passion, yields to him. Shortly after, meeting Hellena in the street, he commences an ardent courtship, which is detected by the jealous Angelica, who has followed him vizarded. Florinda that night at the garden-gate encounters Willmore, who, having been toping in the town, is far from sober, and her cries at his advances attract her brother and servants, whom she eludes by escaping back to the house. After a brawl, Willmore has to endure the reproaches of Belvile, who has appeared on the scene. During their discussion Antonio makes as about to enter Angelica’s house before which they are, and Willmore, justling him to one side, wounds him. He falls, and the officers who run up at the clash of swords, arrest Belvile, who has returned at the noise, as the assailant, conveying him by Antonio’s orders to the Viceroy’s palace. Antonio, in the course of conversation, resigns Florinda to his rival, and Belvile, disguised as Antonio, obtains Florinda from Don Pedro. At this moment Willmore accosts him, and the Spaniard perceiving his mistake, soon takes his sister off home. Angelica next comes in hot pursuit of Willmore, but they are interrupted by Hellena, dressed as a boy, who tells a tale of the Rover’s amour with another dame and so rouses the jealous courtezan to fury, and the twain promptly part quarrelling. Florinda, meanwhile, who has escaped from her brother, running into an open house to evade detection, finds herself in Ned Blunt’s apartments. Blunt, who is sitting half-clad, and in no pleasant mood owing to his having been tricked of clothes and money and turned into the street by a common cyprian, greets her roughly enough, but is mollified by the present of a diamond ring. His friends and Don Pedro, come to laugh at his sorry case, now force their way into the chamber, and Florinda, whom her brother finally resigns to Belvile, is discovered. She is straightway united to her lover by a convenient priest. Willmore is then surprised by the apparition of Angelica, who, loading him with bitter reproaches for his infidelity, is about to pistol him, when she is disarmed by Antonio, and accordingly parts in a fury of jealous rage, to give place to Hellena who adroitly secures her Rover in the noose of matrimony.

The entire plan and many details of both parts of The Rover are taken openly and unreservedly from Tom Killigrew’s Thomaso, or The Wanderer, an unacted comedy likewise in two parts, published for the first time in his collected works by Henry Herringman (folio, 1663-4). It is to be noticed, however, that whilst Killigrew’s work is really one long play of ten closely consecutive acts, the scene of which is continually laid in Madrid, without any break in time or action, Mrs. Behn, on the other hand, admirably contrives that each separate part of The Rover is complete and possesses perfect unity in itself, the locale being respectively, and far more suitably, in two several places, Naples and Madrid, rather than confined to the latter city alone. Mrs. Behn, moreover, introduces new characters and a new intrigue in her second part, thus not merely sustaining but even renewing the interest which in Thomaso jades and flags most wearily owing to the author’s prolixity and diffuseness.

Killigrew, a royalist to the core, participated in the protracted exile of Charles II, and devoting this interim to literature, wrote Thomaso whilst at Madrid, probably about the year 1654-5. Although undeniably interesting in a high degree, and not ill written, it shares in no small measure the salient faults of his other productions, boundless and needless verbosity, slowness of action, unconscionable length.