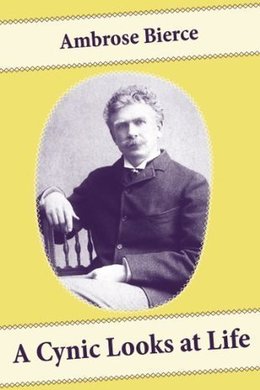 A Cynic Looks at Life

A collection of essays in which Bierce talks about modern civilization and all its faults, the death penalty and many others. His arguments are still relevant to issues of today. Ambrose Bierce was well known for his biting wit and cynical approach to life.

The question “Does civilization civilize?” is a fine example of petitio principii, and decides itself in the affirmative; for civilization must needs do that from the doing of which it has its name. But it is not necessary to suppose that he who propounds is either unconscious of his lapse in logic or desirous of digging a pitfall for the feet of those who discuss; I take it he simply wishes to put the matter in an impressive way, and relies upon a certain degree of intelligence in the interpretation.

Concerning uncivilized peoples we know but little except what we are told by travelers–who, speaking generally, can know very little but the fact of uncivilization, as shown in externals and irrelevances, and are moreover, greatly given to lying. From the savages we hear very little. Judging them in all things by our own standards in default of a knowledge of theirs, we necessarily condemn, disparage and belittle. One thing that civilization certainly has not done is to make us intelligent enough to understand that the contrary of a virtue is not necessarily a vice. Because, as a rule, we have but one wife and several mistresses each it is not certain that polygamy is everywhere–nor, for that matter, anywhere–either wrong or inexpedient. Because the brutality of the civilized slave owners and dealers created a conquering sentiment against slavery it is not intelligent to assume that slavery is a maleficent thing amongst Oriental peoples (for example) where the slave is not oppressed. Some of these same Orientals whom we are pleased to term half-civilized have no regard for truth. “Takest thou me for a Christian dog,” said one of them, “that I should be the slave of my word?” So far as I can perceive, the “Christian dog” is no more the slave of his word than the True Believer, and I think the savage–allowing for the fact that his inveracity has dominion over fewer things–as great a liar as either of them. For my part, I do not know what, in all circumstances, is right or wrong; but I know that, if right, it is at least stupid, to judge an uncivilized people by the standards of morality and intelligence set up by civilized ones. Life in civilized countries is so complex that men there have more ways to be good than savages have, and more to be bad; more to be happy, and more to be miserable. And in each way to be good or bad, their generally superior knowledge–their knowledge of more things–enables them to commit greater excesses than the savage can. The civilized philanthropist wreaks upon his fellows a ranker philanthropy, the civilized rascal a sturdier rascality. And–splendid triumph of enlightenment!–the two characters are, in civilization, frequently combined in one person.

I know of no savage custom or habit of thought which has not its mate in civilized countries. For every mischievous or absurd practice of the natural man I can name you one of ours that is essentially the same. And nearly every custom of our barbarian ancestors in historic times persists in some form today. We make ourselves look formidable in battle–for that matter, we fight. Our women paint their faces. We feel it obligatory to dress more or less alike, inventing the most ingenious reasons for doing so and actually despising and persecuting those who do not care to conform. Almost within the memory of living persons bearded men were stoned in the streets; and a clergyman in New York who wore his beard as Christ wore his, was put into jail and variously persecuted till he died.

Civilization does not, I think, make the race any better. It makes men know more: and if knowledge makes them happy it is useful and desirable. The one purpose of every sane human being is to be happy. No one can have any other motive than that. There is no such thing as unselfishness. We perform the most “generous” and “self-sacrificing” acts because we should be unhappy if we did not. We move on lines of least reluctance. Whatever tends to increase the beggarly sum of human happiness is worth having; nothing else has any value.

The cant of civilization fatigues. Civilization, is a fine and beautiful structure. It is as picturesque as a Gothic cathedral, but it is built upon the bones and cemented with the blood of those whose part in all its pomp is that and nothing more. It cannot be reared in the ungenerous tropics, for there the people will not contribute their blood and bones. The proposition that the average American workingman or European peasant is “better off” than the South Sea islander, lolling under a palm and drunk with over-eating, will not bear a moment’s examination. It is we scholars and gentlemen that are better off.