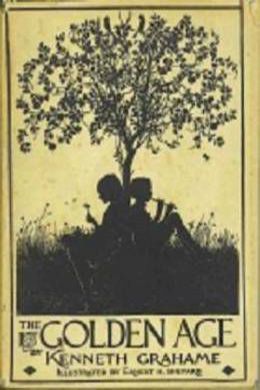 Imagine The Wind in the Willows with real children in place of Kenneth Grahame’s storybook animals, and you’ll get a picture of The Golden Age. Thoughtful short stories about five endearing and creative siblings growing up in late Victorian England, the charming vignettes gently probe differences between children’s and adults’ perceptions of the world. Grahame’s enchanting reminiscences and inventions, based in part on his own Victorian childhood, are enhanced by the delightful illustrations of renowned American artist Maxfield Parrish. This book, and its companion Dream Days, remain beguiling today. While their language is sophisticated, confident reader of ten and up might easily find themselves caught in the web of story the author weaves; older readers have no excuse not to revel in these marvelous volumes.

The masterful wind was up and out, shouting and chasing, the lord of the morning. Poplars swayed and tossed with a roaring swish; dead leaves sprang aloft, and whirled into space; and all the clear–swept heaven seemed to thrill with sound like a great harp.

It was one of the first awakenings of the year. The earth stretched herself, smiling in her sleep; and everything leapt and pulsed to the stir of the giant’s movement. With us it was a whole holiday; the occasion a birthday—it matters not whose. Some one of us had had presents, and pretty conventional speeches, and had glowed with that sense of heroism which is no less sweet that nothing has been done to deserve it. But the holiday was for all, the rapture of awakening Nature for all, the various outdoor joys of puddles and sun and hedge–breaking for all. Colt–like I ran through the meadows, frisking happy heels in the face of Nature laughing responsive. Above, the sky was bluest of the blue; wide pools left by the winter’s floods flashed the colour back, true and brilliant; and the soft air thrilled with the germinating touch that seemed to kindle something in my own small person as well as in the rash primrose already lurking in sheltered haunts. Out into the brimming sun–bathed world I sped, free of lessons, free of discipline and correction, for one day at least. My legs ran of themselves, and though I heard my name called faint and shrill behind, there was no stopping for me. It was only Harold, I concluded, and his legs, though shorter than mine, were good for a longer spurt than this. Then I heard it called again, but this time more faintly, with a pathetic break in the middle; and I pulled up short, recognising Charlotte’s plaintive note.

She panted up anon, and dropped on the turf beside me. Neither had any desire for talk; the glow and the glory of existing on this perfect morning were satisfaction full and sufficient.

“Oh, he’s just playin’ muffin–man, as usual,” said Charlotte with petulance. “Fancy wanting to be a muffin–man on a whole holiday!”

It was a strange craze, certainly; but Harold, who invented his own games and played them without assistance, always stuck staunchly to a new fad, till he had worn it quite out. Just at present he was a muffin–man, and day and night he went through passages and up and down staircases, ringing a noiseless bell and offering phantom muffins to invisible wayfarers. It sounds a poor sort of sport; and yet—to pass along busy streets of your own building, for ever ringing an imaginary bell and offering airy muffins of your own make to a bustling thronging crowd of your own creation—there were points about the game, it cannot be denied, though it seemed scarce in harmony with this radiant wind–swept morning!

“And Edward, where is he?” I questioned again.

“He’s coming along by the road,” said Charlotte. “He’ll be crouching in the ditch when we get there, and he’s going to be a grizzly bear and spring out on us, only you mustn’t say I told you, ‘cos it’s to be a surprise.”

“All right,” I said magnanimously. “Come on and let’s be surprised.” But I could not help feeling that on this day of days even a grizzly felt misplaced and common.

Sure enough an undeniable bear sprang out on us as we dropped into the road; then ensued shrieks, growlings, revolver–shots, and unrecorded heroisms, till Edward condescended at last to roll over and die, bulking large and grim, an unmitigated grizzly. It was an understood thing, that whoever took upon himself to be a bear must eventually die, sooner or later, even if he were the eldest born; else, life would have been all strife and carnage, and the Age of Acorns have displaced our hard–won civilisation. This little affair concluded with satisfaction to all parties concerned, we rambled along the road, picking up the defaulting Harold by the way, muffinless now and in his right and social mind.

“What would you do?” asked Charlotte presently,—the book of the moment always dominating her thoughts until it was sucked dry and cast aside,—”what would you do if you saw two lions in the road, one on each side, and you didn’t know if they was loose or if they was chained up?”

His boastful accents died away into a mumble: “Dunno what I should do.”

“Shouldn’t do anything,” I observed after consideration; and really it would be difficult to arrive at a wiser conclusion.

“If it came to DOING,” remarked Harold, reflectively, “the lions would do all the doing there was to do, wouldn’t they?”

“But if they was GOOD lions,” rejoined Charlotte, “they would do as they would be done by.”

“Ah, but how are you to know a good lion from a bad one?” said Edward. “The books don’t tell you at all, and the lions ain’t marked any different.”

“Why, there aren’t any good lions,” said Harold, hastily.