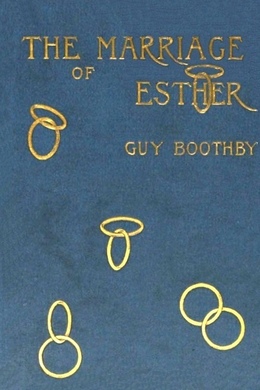 The Marriage of Esther

Two men, a fight, and a series of calamitous circumstances. The bar of the Hotel of All Nations, Thursday Island. Time, 9.35, one hot evening towards the end of summer. The room contains about twenty men, in various stages of undress; an atmosphere like the furnace doors of Sheol; two tatterdemalions lolling, apart from the rest, at the end of a long counter; a babel of voices, with the thunder of the surf, on the beach outside, over all.

There was surely complete evidence before the house that the two ragamuffins particularised above were unpopular. So far the silent but contemptuous superiority of the taller, and the drunken and consequently more outspoken insolence of his companion, had failed to prepossess one single soul in their favour. Even the barman, upon whose professional affability the most detested might, during moments of the world’s disaffection, rely with some degree of certainty, had not been able to bring himself to treat them otherwise than with the most studied coldness. This fact was in itself significant, not only because it showed the state of his own feelings regarding them, but inasmuch as it served to give the customers of the Hotel of All Nations their cue, upon which they were not slow to model their own behaviour. Men are peculiarly imitative animals at times.

But, however much his manners might fall short of the ideal, the taller of the twain was certainly not ill-looking. In stature he might have been described as distinctly tall; his inches would have totalled considerably over six feet. His frame was large, his limbs plainly muscular; his head was not only well set upon his shoulders, but admirably shaped; while his features, with the exception of a somewhat pronounced nose, were clearly cut, and, if one may be permitted the expression, exceedingly harmonious. His eyes were of an almost greeny shade of blue, and his hair, brown like his moustache, fell back off his forehead in graceful curls, as if the better to accentuate the fact that his ears were small and flat, and, what is uncommon in those organs, packed in close to his head. On the other hand, however, his costume, judged even by Thursday Island standards, was not so satisfactory. It consisted of a pair of much worn moleskin trousers, a patched shirt of doubtful texture and more than doubtful hue, open at the neck and revealing to the world’s gaze a waste of sunburnt chest, and a cabbage-tree hat that had long since ceased to be either new or waterproof. His extremities were bare, and, at the moment of our introduction, for want of something better to do he was engaged in idly tracing Euclid’s Pons Asinorum in the sand of the floor with the big toe of his right foot. So much for Cuthbert Ellison, the principal figure in our story.

Silas Murkard, his companion, was fashioned on totally different lines. His height was as much below the average as his companion’s was above it; his back was broad, but ill-shaped; while his legs, which were altogether too long for his body, had a peculiar habit of knocking themselves together at the knees as he walked. It was for this reason that he wore the two leather patches inside, and halfway up, his trouser legs, that had been the subject of so much ironical comment earlier in the day. But, since the patches had been put in, the garment had shrunk almost out of recognition, and consequently they were no longer of use in checking the friction. As a result, two ominous holes were assisting still further in the business of disintegration going on all over his raiment. It was peculiar also, that in spite of the workmanship once bestowed upon his threadbare coat, the hump between his abnormally broad shoulder-blades gave his head an appearance of being always craned forward in search of something, which notion of inquisitiveness was not lessened by the pinched sharpness of his face. Indeed, it might almost be said that his features backed up the impression thus given, and hinted that he was one of that peculiar class of persons who, having much to conceal in their own lives, are never really happy unless they are engaged in discovering something of an equally detrimental character in those of their neighbours. But in this respect Dame Nature had maligned him. He had many faults–few men more–but whatever else he might have been, he certainly was not inquisitive. Doubtless, had he been questioned on the subject, he would have replied with the Apocrypha, “The curiosity of knowing things has been given to man for a scourge.” And even if he had not anything else to boast of, he had, at least, his own ideas of the use and properties of scourges!