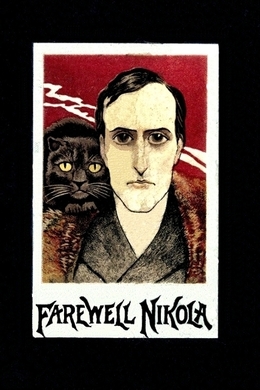 Boothbys fifth novel of five about the notorious Doctor Nikola, an occultist anti-hero seeking immortality and world domination. Nikola may be the world’s first modern super villain: he is a master of hypnotism and mind control, a telepathic adept, and an astral projectionist. He can cause ordinary men to see images in pools of liquid, and prophesy into the future. It’s said that he knows the hour, moment, and method of his own demise. “At first I came to the conclusion that it must be a bat, or some night bird, but that theory exploded. Bats do not remain at the same exact distance from the floor, nor do they stand stationary behind a man’s chair for any length of time. The hour will come, however, when it will be possible for us to see these things; I am on the track even now.”

We were in Venice; Venice the silent and mysterious; the one European city of which I never tire. My wife had not enjoyed good health for some months past, and for this reason we had been wintering in Southern Italy. After that we had come slowly north, spending a month in Florence, and a fortnight in Rome en route, until we found ourselves in Venice, occupying a suite of apartments at Galaghetti’s famous hotel overlooking the Grand Canal. Our party was a small one; it consisted of my wife, her friend, Gertrude Trevor, and myself, Richard Hatteras, once of the South Sea Islands, but now of the New Forest, Hampshire, England. It may account for our fondness of Venice when I say that four years previous we had spent the greater part of our honeymoon there. Whatever the cause may have been, however, there could be no sort of doubt that the grand old city, with its palaces and churches, its associations stretching back to long-forgotten centuries, and its silent waterways, possessed a great fascination for us. We were never tired of exploring it, finding something to interest us in even the most out-of-the-way corners. In Miss Trevor we possessed a charming companion, a vital necessity, as you will admit, when people travel together. She was an uncommon girl in more ways than one; a girl, so it seems to me, England alone is able to produce. She could not be described as a pretty girl, but then the word “pretty” is one that sometimes comes perilously near carrying contempt with it; one does not speak of Venus de Medici as pretty, nor would one describe the Apollo Belvedere as very nice-looking. That Miss Trevor was exceedingly handsome would, I fancy, be generally admitted. At any rate she would command attention wherever she might go, and that is an advantage which few of us possess. Should a more detailed description of her be necessary, I might add that she was tall and dark, with black hair and large luminous eyes that haunted one, and were suggestive of a southern ancestor. She was the daughter, and indeed the only child, of the well-known Dean of Bedminster, and this was the first time she had visited Italy, or that she had been abroad. The wonders of the Art Country were all new to her, and in consequence our wanderings were one long succession of delight. Every day added some new pleasure to her experiences, while each night saw a life desire gratified.

In my humble opinion, to understand Italy properly one should not presume to visit her until after the first blush of youth has departed, and then only when one has prepared oneself to properly appreciate her many beauties. Venice, above all others, is a city that must be taken seriously. To come at a proper spirit of the place one must be in a reverent mood. Cheap jokes and Cockney laughter are as unsuited to the place, where Falieri yielded his life, as a downcast face would be in Nice at carnival time. On the afternoon of the particular day from which I date my story, we had been to the island of Murano to pay a visit to the famous glass factories of which it is the home. By the time we reached Venice once more it was nearly sunset. Having something like an hour to spare we made our way, at my wife’s suggestion, to the Florian café on the piazza of Saint Mark in order to watch the people. As usual the place was crowded, and at first glance it looked as if we should be unable to find sufficient vacant chairs. Fortune favoured us, however, and when we had seated ourselves and I had ordered coffee, we gave ourselves up to the enjoyment of what is perhaps one of the most amusing scenes in Venice. To a thoughtful mind the Great Square must at all times be an object of absorbing interest. I have seen it at every hour, and under almost every aspect: at break of day, when one has it to oneself and is able to enjoy its beauty undisturbed; at midday, when the importunate shop-keepers endeavour to seduce one into entering their doors (by tales of the marvels therein); at sunset, when the cafés are crowded, the band plays, and all is merriment; and last, but not least, at midnight, when the moon is sailing above Saint Mark’s, the square is full of strange shadows, and the only sound to be heard is the cry of a gull on the lagoon, or the “Sa Premi” of some belated gondolier.

“This is the moment to which I have looked forward all my life,” said Miss Trevor, as she sat back in her chair and watched the animated crowd before her. “Look at that pretty little boy with the pigeons flocking round him. What a picture he would make if one only had a camera.”

“If you care to have a photo of him one can easily be obtained,” I remarked. “Any one of these enterprising photographers would be only too pleased to take one for you for a few centissimi. I regret to say that many of our countrymen have a weakness for being taken in that way.”