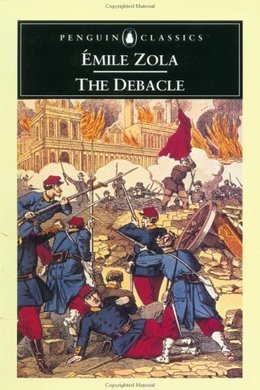 Conservative and working-class, Jean Macquart is an experienced, middle-aged soldier in the French army, who has endured deep personal loss. When he first meets the wealthy and mercurial Maurice Levasseur, who never seems to have suffered, his hatred is immediate. But after they are thrown together during the disastrous Franco-Prussian war of 1870-71, the pair are compelled to understand one other. Forging a profound friendship, they must struggle together to endure a disorganised and brutal war, the savage destruction of France’s Second Empire and the fall of Napoleon III. One of the greatest of all war novels, The Debacle is the nineteenth novel in Zola’s great Rougon-Macquart cycle. A forceful and deeply moving tale of close friendship, it is also a fascinating chronicle of the events that were to lead, in the words of Zola himself, to ‘the murder of a nation’.

In the middle of the broad, fertile plain that stretches away in the direction of the Rhine, a mile and a quarter from Mulhausen, the camp was pitched. In the fitful light of the overcast August day, beneath the lowering sky that was filled with heavy drifting clouds, the long lines of squat white shelter-tents seemed to cower closer to the ground, and the muskets, stacked at regular intervals along the regimental fronts, made little spots of brightness, while over all the sentries with loaded pieces kept watch and ward, motionless as statues, straining their eyes to pierce the purplish mists that lay on the horizon and showed where the mighty river ran.

It was about five o’clock when they had come in from Belfort; it was now eight, and the men had only just received their rations. There could be no distribution of wood, however, the wagons having gone astray, and it had therefore been impossible for them to make fires and warm their soup. They had consequently been obliged to content themselves as best they might, washing down their dry hard-tack with copious draughts of brandy, a proceeding that was not calculated greatly to help their tired legs after their long march. Near the canteen, however, behind the stacks of muskets, there were two soldiers pertinaciously endeavoring to elicit a blaze from a small pile of green wood, the trunks of some small trees that they had chopped down with their sword-bayonets, and that were obstinately determined not to burn. The cloud of thick, black smoke, rising slowly in the evening air, added to the general cheerlessness of the scene.

There were but twelve thousand men there, all of the 7th corps that the general, Felix Douay, had with him at the time. The 1st division had been ordered to Froeschwiller the day before; the 3d was still at Lyons, and it had been decided to leave Belfort and hurry to the front with the 2d division, the reserve artillery, and an incomplete division of cavalry. Fires had been seen at Lorrach. The sous-prefet at Schelestadt had sent a telegram announcing that the Prussians were preparing to pass the Rhine at Markolsheim. The general did not like his unsupported position on the extreme right, where he was cut off from communication with the other corps, and his movement in the direction of the frontier had been accelerated by the intelligence he had received the day before of the disastrous surprise at Wissembourg. Even if he should not be called on to face the enemy on his own front, he felt that he was likely at any moment to be ordered to march to the relief of the 1st corps. There must be fighting going on, away down the river near Froeschwiller, on that dark and threatening Saturday, that ominous 6th of August; there was premonition of it in the sultry air, and the stray puffs of wind passed shudderingly over the camp as if fraught with tidings of impending evil. And for two days the division had believed that it was marching forth to battle; the men had expected to find the Prussians in their front, at the termination of their forced march from Belfort to Mulhausen.

The day was drawing to an end, and from a remote corner of the camp the rattling drums and the shrill bugles sounded retreat, the sound dying away faintly in the distance on the still air of evening. Jean Macquart, who had been securing the tent and driving the pegs home, rose to his feet. When it began to be rumored that there was to be war he had left Rognes, the scene of the bloody drama in which he had lost his wife, Francoise and the acres that she brought him; he had re-enlisted at the age of thirty-nine, and been assigned to the 106th of the line, of which they were at that time filling up the cadres, with his old rank of corporal, and there were moments when he could not help wondering how it ever came about that he, who after Solferino had been so glad to quit the service and cease endangering his own and other people’s lives, was again wearing the capote of the infantry man. But what is a man to do, when he has neither trade nor calling, neither wife, house, nor home, and his heart is heavy with mingled rage and sorrow? As well go and have a shot at the enemy, if they come where they are not wanted. And he remembered his old battle cry: Ah! bon sang! if he had no longer heart for honest toil, he would go and defend her, his country, the old land of France!