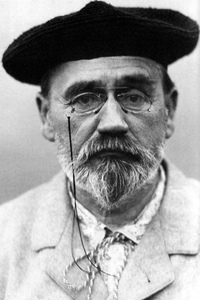 Émile Édouard Charles Antoine Zola was a French writer, the most well-known practitioner of the literary school of naturalism and an important contributor to the development of theatrical naturalism. He was a major figure in the political liberalization of France and in the exoneration of the falsely accused and convicted army officer Alfred Dreyfus, which is encapsulated in the renowned newspaper headline J’accuse. Zola was nominated for the first and second Nobel Prize in Literature in 1901 and 1902. During his early years, Zola wrote numerous short stories and essays, four plays and three novels. Among his early books was Contes à Ninon, published in 1864. With the publication of his sordid autobiographical novel La Confession de Claude attracting police attention, Hachette fired him. After his first major novel, Thérèse Raquin, he started the series called Les Rougon Macquart, about a family under the Second Empire.

Serge Mouret, the younger son of Francois Mouret, is ordained to the priesthood and appointed Cure of Les Artaud, a squalid village in Provence, to whos...read more »

This final volume in Zola’s twenty-book Rougon-Macquart cycle serves in many respects as an epilogue to the series—but it’s also a fine tale in its own ...read more »

With flawless construction and impeccable detail, Germinal chronicles the conflicts, lusts, and deprivation of life in the coal fields of nineteenth-cen...read more »

The Masterpiece is the tragic story of Claude Lantier, an ambitious and talented young artist who has come from the provinces to conquer Paris but is co...read more »

Abandoned by her lover and left to bring up their two children alone, Gervaise Macquart has to fight to earn an honest living. When she accepts the marr...read more »

In this moving depiction of a pilgrimage to Lourdes, the master French realist has created a novel of vivid characters and subtle commentary on sufferin...read more »

Prompted by his theories of heredity and environment, Zola set out out to show Nana, the golden fly, rising out of the underworld to feed on society–a p...read more »

The concluding volume of the Three Cities trilogy is very different from Lourdes and Rome. Whilst recounting the struggles and fate of Abbe Froment and ...read more »

Three years after his visit to Lourdes, Abbé Pierre Froment has written an ecumenical work, New Rome, that has been placed on the Index. In an attempt t...read more »

Conservative and working-class, Jean Macquart is an experienced, middle-aged soldier in the French army, who has endured deep personal loss. When he fir...read more »

Set against the background of a town in Northern France, this novel tells the story of a love idyll between a poor embroideress and the son of a wealthy...read more »

Sixty-two-year-old Louis Roubieu sees his family’s long-awaited prosperity as a reward rained upon him by God for years of arduous toil on the land. Yet...read more »

The first in Zola’s famous Rougon-Macquart series of novels. In it we learn how the two branches of the family came about, and the origins of the heredi...read more »

One of Zola’s most famous realistic novels, Therese Raquin is a clinically observed, sinister tale of adultery and murder among the lower classes in nin...read more »