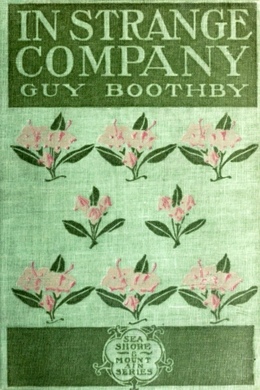 A Story of Chili and the Southern Seas

Australian author Guy Boothby put his wanderlust to work as fodder for his fiction. Though his first publication was a non-fiction account of a trip through his native country, he soon turned to fiction as an outlet for his creativity, focusing primarily on action-adventure, mystery, and detection tales. In Strange Company was Boothby’s first novel and an instant success, and will satisfy contemporary readers looking for a well-plotted action-adventure story.

So far we have seen, that shifty Marmaduke Plowden, in Chili known as Marcos Veneda, despatched to the care of his uncle, Sir Benjamin Plowden, of the East India Avenue, London, £200,000 in English gold, with the request that that gentleman would keep it for him until he could come home to look after it himself.

Now, to properly understand our story, we must hark back to the very beginning of things, and endeavour to discover where such an enormous fortune came from in the first instance; for the statement of its owner that he derived it from his silver mines and Hacienda properties is not worthy of a moment’s credence. There is only one person who can elucidate the mystery for us, and his extraordinary adventures we must now proceed to consider.

You must understand that Michael Bradshaw, of 3 Parkington Terrace, South Kensington, was that sort of superlatively clever person who, after a life of grand coups, always comes to grief in some superlatively silly fashion. From the day on which he first entered the service of the Anglo-Kamtchatka Bank, to the evening of the dinner in his honour at the Whitehall Rooms as general manager, his career was one of exceptional brilliance. He it was who hit out the scheme which saved the Bank in the matter of the Bakell-Askern Syndicate; he it was who manipulated the Patagonian Bonds and the Golden Sunset Silver Mining Company to the Bank’s ultimate advantage; he it was who–but there, his devices are matters of history, and beyond being corroborative evidences of his cleverness, are of little or no moment to this story. The following notice of the dinner above referred to appeared in the columns of the daily press the next morning, and is worth considering–

After the dinner the manager drove back to his house in Kensington. Though it was well-nigh two o’clock, he did not think of going to bed, but went into his study and lit a cigar. As every one had noticed that evening, he certainly looked as if he needed a holiday; his face was woefully haggard, and his eyes had a peculiar brilliance that spoke, as plainly as any words, of sleepless nights and never-ceasing worry and anxiety.

For a long time he promenaded the room, his hands in his pockets and his face sternly set. Once he smiled sardonically as the recollection of the evening’s speeches crossed his mind. Then, throwing himself into a chair before his writing-table, he began to unlock the drawers, and to destroy the papers they contained.

When this task was completed, the sun had been up some time, and a large pile of paper-ash lay inside the grate. He pulled back the curtains, unbarred the shutters, and opened the window, letting in a flood of sunshine. Then, dropping into a comfortable chair beside the fire, he fell asleep.

By eight o’clock he was at Charing Cross, his ticket was taken, and he was bidding good-bye to a large crowd of friends.

Next day, instead of busying himself with the enjoyments of Monte Carlo, as his friends supposed him, he was in reality at Dieppe, anxiously awaiting the arrival of a small brig, the Florence Annie of Teignmouth. As soon as she arrived he boarded her, and half-an-hour later, a course being set, she was bowling down Channel, bound for Buenos Ayres. It was peculiar that the captain invariably addressed his passenger as “Mr. Vincent.” It was strange also that, for a voyage of such duration, he should have brought with him so small an amount of luggage. In the hold, however, were half-a-dozen barrels inscribed with his name, and labelled “Cement.” Now cement, as everyone knows, is a staple article of export from Great Britain to the South American Republics.

A month later, all England was astounded by the news that Michael Bradshaw, the admired and universally respected, was wanted by the police on a charge of defrauding the Anglo-Kamtchatka Banking Company of £250,000. But so carefully had his plans been arranged, that not a trace of either the money or his whereabouts could be discovered. Being a cultivated person, he might have replied with Plautus, “Doli non doli sunt, nisi astu colas.”