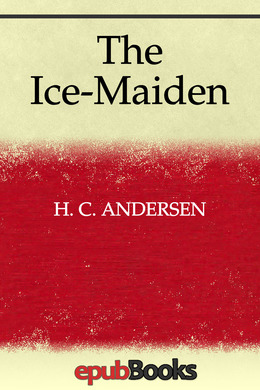 The Ice-Maiden and Other Tales

The Ice Maiden rules the cold snowcapped mountains of Switzerland. Before Rudy was a year old, the Ice Maiden claimed his father into the icy depths of the mountains–and now she wants Rudy too. The precocious little boy must now do everything in his power to resist the lure of the Ice Maiden … and escape her frosty grasps.

Let us visit Switzerland and look around us in the glorious country of mountains, where the forest rises out of steep rocky walls; let us ascend to the dazzling snow-fields, and thence descend to the green plains, where the rivulets and brooks hasten away, foaming up, as if they feared not to vanish, as they reached the sea.

The sun beams upon the deep valley, it burns also upon the heavy masses of snow; so that after the lapse of years, they melt into shining ice-blocks, and become rolling avalanches and heaped-up glaciers.

Two of these lie in the broad clefts of the rock, under the Schreckhorn and Wetterhorn, near the little town of Grindelwald. They are so remarkable that many strangers come to gaze at them, in the summer time, from all parts of the world; they come over the high snow-covered mountains, they come from the deepest valleys, and they are obliged to ascend during many hours, and as they ascend, the valley sinks deeper and deeper, as though seen from an air-balloon.

Far around the peaks of the mountains, the clouds often hang like heavy curtains of smoke; whilst down in the valley, where the many brown wooden houses lie scattered about, a sun-beam shines, and here and there brings out a tiny spot, in radiant green, as though it were transparent. The water roars, froths and foams below, the water hums and tinkles above, and it looks as if silver ribbons were fluttering over the cliffs.

On each side of the way, as one ascends, are wooden houses; each house has a little potato-garden, and that is a necessity, for in the door-way are many little mouths. There are plenty of children, and they can consume abundance of food; they rush out of the houses, and throng about the travellers, come they on foot or in carriage. The whole horde of children traffic; the little ones offer prettily carved wooden houses, for sale, similar to those they build on the mountains. Rain or shine, the children assemble with their wares.

Some twenty years ago, there stood here, several times, a little boy, who wished to sell his toys, but he always kept aloof from the other children; he stood with serious countenance and with both hands tightly clasped around his wooden box, as if he feared it would slip away from him; but on account of this gravity, and because the boy was so small, it caused him to be remarked, and often he made the best bargain, without knowing why. His grandfather lived still higher in the mountains, and it was he who carved the pretty wooden houses. There stood in the room, an old cup-board, full of carvings; there were nut-crackers, knives, spoons, and boxes with delicate foliage, and leaping chamois; there was everything, which could rejoice a merry child’s eye, but this little fellow, (he was named Rudy) looked at and desired only the old gun under the rafters. His grandfather had said, that he should have it some day, but that he must first grow big and strong enough to use it.

Small as the boy was, he was obliged to take care of the goats, and if he who can climb with them is a good guardian, well then indeed was Rudy. Why he climbed even higher than they! He loved to take the bird’s nests from the trees, high in the air, for he was bold and daring; and he only smiled when he stood by the roaring water-fall, or when he heard a rolling avalanche.

He never played with the other children; he only met them, when his grandfather sent him out to sell his carvings, and Rudy took but little interest in this; he much preferred to wander about the rocks, or to sit and listen to his grandfather relate about old times and about the inhabitants of Meiringen, where he came from. He said that these people had not been there since the beginning of the world; they had come from the far North, where the race called Swedes, dwelt. To know this, was indeed great wisdom, and Rudy knew this; but he became still wiser, through the intercourse which he had with the other occupants of the house–belonging to the animal race. There was a large dog, Ajola, an heir-loom from Rudy’s father; and a cat, and she was of great importance to Rudy, for she had taught him to climb. “Come out on the roof!” said the cat, quite plain and distinctly, for when one is a child, and can not yet speak, one understands the hens and ducks, the cats and dogs remarkably well; they speak for us as intelligibly as father or mother. One needs but to be little, and then even grandfather’s stick can neigh, and become a horse, with head, legs and tail. With some children, this knowledge slips away later than with others, and people say of these, that they are very backward, that they remain children fearfully long.–People say so many things!