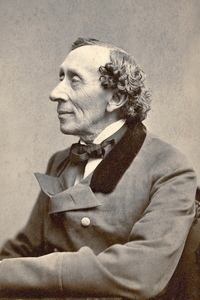 Hans Christian Andersen was a Danish author and poet, most famous for his fairy tales. Among his best-known stories are “The Little Mermaid”, “Thumbelina” and “The Ugly Duckling”. During Andersen’s lifetime he was feted by royalty and acclaimed for having brought great enjoyment to a whole generation of children throughout Europe. His fairy tales have been translated into more than 150 languages and they continue to be published in millions of copies all over the world. His fairy tales have inspired the creation of numerous films, theatre plays, ballets and film animations.

During 1835 Andersen published the first instalment of his immortal Fairy Tales with many more stories, completing the first volume, were published throughout 1836 and 1837, although the quality of these stories was not immediately recognised, and they sold poorly. At the same time, Andersen enjoyed more success with two novels: O.T. and Only a Fiddler. In the English-speaking world, many of these stories remain popular and are widely read. (source: Wikipedia)

During a visit with Chalse Dickens in England, there sprung forth–as the flowers spring forth in the forest–these short stories for the festive season, ...read more »

Hans Christian Andersen’s Fairy Tales are like exquisite jewels, drawing from us gasps of recognition and delight. Andersen created intriguing and uniqu...read more »

An unexpected romance novel from the author of many famous children’s stories, featuring the main character; Otto.

Written towards the end of Andersen’s career, Rudy and Babette tells the tale of Rudy, a boy who lost both his parents and goes to live with his uncle. ...read more »

The Ice Maiden rules the cold snowcapped mountains of Switzerland. Before Rudy was a year old, the Ice Maiden claimed his father into the icy depths of ...read more »

A collection of short stories by Hans Christian Anderson, set in beautiful surroundings with lively description of the characters and the ambiance. The ...read more »

Autobiographical novel of one of the greatest children’s writers that has ever lived: Hans Christian Andersen. Most famous for his versions of classic f...read more »

Considered as a sequel to Stories and Tales, this book contains tales and sketches various in character; and following, as it does, an earlier volume, c...read more »

For Andersen, 1845 is heralded as a breakthrough year in which four different translations of his fairy tales were published. The Little Mermaid appeare...read more »