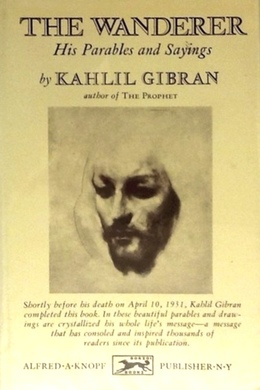 Shortly before his death Gibran completed this book. In these beautiful parables and drawings are crystallized his whole life’s message–a message that has consoled and inspired thousands of readers since its publication.

I met him at the crossroads, a man with but a cloak and a staff, and a veil of pain upon his face. And we greeted one another, and I said to him, “Come to my house and be my guest.”

My wife and my children met us at the threshold, and he smiled at them, and they loved his coming.

Then we all sat together at the board and we were happy with the man for there was a silence and a mystery in him.

And after supper we gathered to the fire and I asked him about his wanderings.

He told us many a tale that night and also the next day, but what I now record was born out of the bitterness of his days though he himself was kindly, and these tales are of the dust and patience of his road.

And when he left us after three days we did not feel that a guest had departed but rather that one of us was still out in the garden and had not yet come in.

Upon a day Beauty and Ugliness met on the shore of a sea. And they said to one another, “Let us bathe in the sea.”

Then they disrobed and swam in the waters. And after a while Ugliness came back to shore and garmented himself with the garments of Beauty and walked away.

And Beauty too came out of the sea, and found not her raiment, and she was too shy to be naked, therefore she dressed herself with the raiment of Ugliness. And Beauty walked her way.

And to this very day men and women mistake the one for the other.

Yet some there are who have beheld the face of Beauty, and they know her notwithstanding her garments. And some there be who know the face of Ugliness, and the cloth conceals him not from their eyes.

A skylark and an eagle met on a rock upon a high hill. The skylark said, “Good morrow to you, Sir.” And the eagle looked down upon him and said faintly, “Good morrow.”

And the skylark said, “I hope all things are well with you, Sir.”

“Aye,” said the eagle, “all is well with us. But do you not know that we are the king of birds, and that you shall not address us before we ourselves have spoken?”

Said the skylark, “Methinks we are of the same family.”

The eagle looked upon him with disdain and he said, “Who ever has said that you and I are of the same family?”

Then said the skylark, “But I would remind you of this, I can fly even as high as you, and I can sing and give delight to the other creatures of this earth. And you give neither pleasure nor delight.”

Then the eagle was angered, and he said, “Pleasure and delight! You little presumptuous creature! With one thrust of my beak I could destroy you. You are but the size of my foot.”

Then the skylark flew up and alighted upon the back of the eagle and began to pick at his feathers. The eagle was annoyed, and he flew swift and high that he might rid himself of the little bird. But he failed to do so. At last he dropped back to that very rock upon the high hill, more fretted than ever, with the little creature still upon his back, and cursing the fate of the hour.

Now at that moment a small turtle came by and laughed at the sight, and laughed so hard the she almost turned upon her back.

And the eagle looked down upon the turtle and he said, “You slow creeping thing, ever one with the earth, what are you laughing at?”

And the turtle said, “Why I see that you are turned horse, and that you have a small bird riding you, but the small bird is the better bird.”

And the eagle said to her, “Go you about your business. This is a family affair between my brother, the lark, and myself.”

A poet once wrote a love song and it was beautiful. And he made many copies of it, and sent them to his friends and his acquaintances, both men and women, and even to a young woman whom he had met but once, who lived beyond the mountains.

And in a day or two a messenger came from the young woman bringing a letter. And in the letter she said, “Let me assure you, I am deeply touched by the love song that you have written to me. Come now, and see my father and my mother, and we shall make arrangements for the betrothal.”

And the poet answered the letter, and he said to her, “My friend, it was but a song of love out of a poet’s heart, sung by every man to every woman.”

And she wrote again to him saying, “Hypocrite and liar in words! From this day unto my coffin-day I shall hate all poets for your sake.”