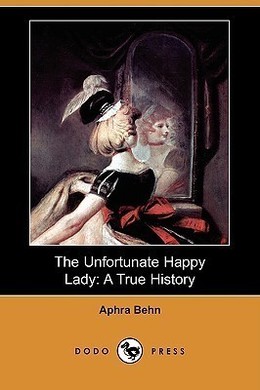 A very English rendering of the classic Spanish novel La burlada Aminta y venganza del honor (Mocked Aminta and honor’s vengence). Behn’s story has a somewhat different beginning and a completely altered ending. Aminta, in her very early teens, becomes a rich orphan of Segovia. Her uncle, following her fathers will, takes charge of the property and brings his niece with him to Burgos…

I cannot omit giving the World an account, of the uncommon Villany of a Gentleman of a good Family in England practis’d upon his Sister, which was attested to me by one who liv’d in the Family, and from whom I had the whole Truth of the Story. I shall conceal the unhappy Gentleman’s own, under the borrow’d Names of Sir William Wilding, who succeeded his Father Sir Edward, in an Estate of near 4000l. a Year, inheriting all that belong’d to him, except his Virtues. ‘Tis true, he was oblig’d to pay his only Sister a Portion of 6000l. which he might very easily have done out of his Patrimony in a little Time, the Estate being not in the least incumbred. But the Death of his good Father gave a loose to the Extravagancy of his Inclinations, which till then was hardly observable. The first Discovery he made of his Humour, was in the extraordinary rich Equipage he prepar’d for his Journey to London, which was much greater than his fair and plentiful Fortune cou’d maintain, nor were his Expences any way inferior to the Figure he made here in Town; insomuch, that in less than a Twelve-Month, he was forc’d to return to his Seat in the Country, to Mortgage a part of his Estate of a Thousand Pounds a Year, to satisfy the Debts he had already contracted in his profuse Treats, Gaming and Women, which in a few Weeks he effected, to the great Affliction of his Sister Philadelphia, a young Lady of excellent Beauty, Education, and Virtue; who, fore-seeing the utter Ruin of the Estate, if not timely prevented, daily begg’d of him, with Prayers and Tears, that might have mov’d a Scythian or wild Arab, or indeed any thing but him, to pay her her Portion. To which, however, he seemingly consented, and promis’d to take her to Town with him, and there give her all the Satisfaction she cou’d expect: And having dipp’d some paltry Acres of Land, deeper than ever Heaven dipp’d ‘em in Rain, he was as good as his Word, and brought her to Town with him, where he told her he would place her with an ancient Lady, with whom he had contracted a Friendship at his first coming to London; adding, that she was a Lady of incomparable Morals, and of a matchless Life and Conversation. Philadelphia took him in the best Sense, and was very desirous to be planted in the same House with her, hoping she might grow to as great a Perfection in such excellent Qualifications, as she imagined ‘em. About four Days therefore after they had been in Town, she sollicits her Brother to wait on that Lady with her: He reply’d, that it is absolutely Necessary and Convenient that I should first acquaint her with my Design, and beg that she will be pleas’d to take you into her Care, and this shall be my chief Business to Day: Accordingly, that very Hour he went to the Lady Beldams, his reverend and honourable Acquaintance, whom he prepar’d for the Reception of his Sister, who he told her was a Cast-Mistress of his, and desir’d her Assistance to prevent the Trouble and Charge, which she knew such Cattle would bring upon young Gentlemen of plentiful Estates. To morrow Morning about Eleven, I’ll leave her with your Ladyship, who, I doubt not, will give her a wholesome Lesson or two before Night, and your Reward is certain. My Son, (return’d she) I know the Greatness of your Spirit, the Heat of your Temper has both warm’d and inflam’d me! I joy to see you in Town again–Ah! That I could but recal one twenty Years for your Sake!–Well–no matter.–I won’t forget your Instructions, nor my Duty to Morrow: In the mean time, I’ll drink your Health in a Bottle of Sherry or two, O! Cry your Mercy, good my Lady Beldam, (said the young Debauchee) I had like to have forfeited my Title to your Care, in not remembring to leave you an Obligation. There are three Guinea’s, which, I hope, will plead for me till to Morrow.–So–Your Ladyship’s Servant humbly kisses your Hand. Your Honours most Obedient Servant, most gratefully Acknowledges your Favours.–Your humble Servant, Good Sir William, added she, seeing him leave her in haste.

Never were three Persons better pleas’d for a Time than this unnatural Man, his sweet innocent Sister, and the Lady Beldam; upon his return to Philadelphia, who could not rest that Night, for thinking on the Happiness she was going to enjoy in the Conversation of so virtuous a Lady as her Brother’s Acquaintance, to whom she was in Hopes that she might discover her dearest Thoughts, and complain of Sir William’s Extravagance and Unkindness, without running the Hazzard of being betray’d; and at the same Time, reasonably expect from so pious a Lady all the Assistance within her Capacity. On the other side, her Brother hugg’d himself in the Prospect he had of getting rid of his own Sister, and the Payment of 6000l. for the Sum of forty or fifty Guineas, by the Help and Discretion of this sage Matron; who, for her part, by this Time, had reckon’d up, and promis’d to herself an Advantage o