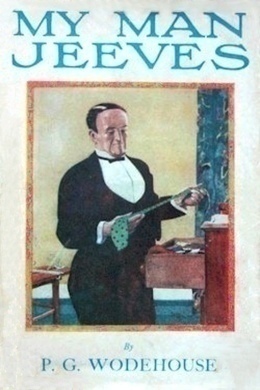 My Man Jeeves, first published in 1919, introduced the world to affable, indolent Bertie Wooster and his precise, capable valet, Jeeves. Some of the finest examples of humorous writing found in English literature are woven around the relationship between these two men of very different classes and temperaments. Where Bertie is impetuous and feeble, Jeeves is cool-headed and poised. This collection, the first book of Jeeves and Wooster stories, includes “Absent Treatment,” “Helping Freddie,” “Rallying Round Old George,” “Doing Clarence a Bit of Good,” “Fixing It for Freddie,” and “Bertie Changes His Mind.” “Mr. Wodehouses idyllic world can never stale.”

Jeeves–my man, you know–is really a most extraordinary chap. So capable. Honestly, I shouldn’t know what to do without him. On broader lines he’s like those chappies who sit peering sadly over the marble battlements at the Pennsylvania Station in the place marked “Inquiries.” You know the Johnnies I mean. You go up to them and say: “When’s the next train for Melonsquashville, Tennessee?” and they reply, without stopping to think, “Two-forty-three, track ten, change at San Francisco.” And they’re right every time. Well, Jeeves gives you just the same impression of omniscience.

As an instance of what I mean, I remember meeting Monty Byng in Bond Street one morning, looking the last word in a grey check suit, and I felt I should never be happy till I had one like it. I dug the address of the tailors out of him, and had them working on the thing inside the hour.

“Jeeves,” I said that evening. “I’m getting a check suit like that one of Mr. Byng’s.”

“Injudicious, sir,” he said firmly. “It will not become you.”

“Unsuitable for you, sir.”

Well, the long and the short of it was that the confounded thing came home, and I put it on, and when I caught sight of myself in the glass I nearly swooned. Jeeves was perfectly right. I looked a cross between a music-hall comedian and a cheap bookie. Yet Monty had looked fine in absolutely the same stuff. These things are just Life’s mysteries, and that’s all there is to it.

But it isn’t only that Jeeves’s judgment about clothes is infallible, though, of course, that’s really the main thing. The man knows everything. There was the matter of that tip on the “Lincolnshire.” I forget now how I got it, but it had the aspect of being the real, red-hot tabasco.

“Jeeves,” I said, for I’m fond of the man, and like to do him a good turn when I can, “if you want to make a bit of money have something on Wonderchild for the ‘Lincolnshire.’”

He shook his head.

“But it’s the straight goods. I’m going to put my shirt on him.”

“I do not recommend it, sir. The animal is not intended to win. Second place is what the stable is after.”

Perfect piffle, I thought, of course. How the deuce could Jeeves know anything about it? Still, you know what happened. Wonderchild led till he was breathing on the wire, and then Banana Fritter came along and nosed him out. I went straight home and rang for Jeeves.

“After this,” I said, “not another step for me without your advice. From now on consider yourself the brains of the establishment.”

“Very good, sir. I shall endeavour to give satisfaction.”

And he has, by Jove! I’m a bit short on brain myself; the old bean would appear to have been constructed more for ornament than for use, don’t you know; but give me five minutes to talk the thing over with Jeeves, and I’m game to advise any one about anything. And that’s why, when Bruce Corcoran came to me with his troubles, my first act was to ring the bell and put it up to the lad with the bulging forehead.

I first got to know Corky when I came to New York. He was a pal of my cousin Gussie, who was in with a lot of people down Washington Square way. I don’t know if I ever told you about it, but the reason why I left England was because I was sent over by my Aunt Agatha to try to stop young Gussie marrying a girl on the vaudeville stage, and I got the whole thing so mixed up that I decided that it would be a sound scheme for me to stop on in America for a bit instead of going back and having long cosy chats about the thing with aunt. So I sent Jeeves out to find a decent apartment, and settled down for a bit of exile. I’m bound to say that New York’s a topping place to be exiled in. Everybody was awfully good to me, and there seemed to be plenty of things going on, and I’m a wealthy bird, so everything was fine. Chappies introduced me to other chappies, and so on and so forth, and it wasn’t long before I knew squads of the right sort, some who rolled in dollars in houses up by the Park, and others who lived with the gas turned down mostly around Washington Square–artists and writers and so forth. Brainy coves.