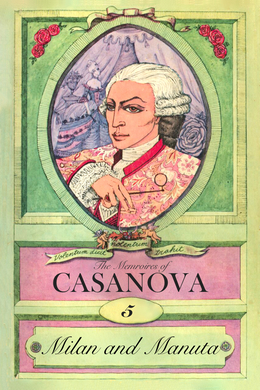 A scholar, an adventurer, perhaps a Cabalist, a busy stirrer in politics, a gamester, one born for the fairer sex, as he tells us, and born also to be a vagabond; this man, who is remembered now for his written account of his own life, was that rarest kind of autobiographer, one who did not live to write, but wrote because he had lived…

On Low Sunday Charles paid us a visit with his lovely wife, who seemed totally indifferent to what Christine used to be. Her hair dressed with powder did not please me as well as the raven black of her beautiful locks, and her fashionable town attire did not, in my eyes, suit her as well as her rich country dress. But the countenances of husband and wife bore the stamp of happiness. Charles reproached me in a friendly manner because I had not called once upon them, and, in order to atone for my apparent negligence, I went to see them the next day with M. Dandolo. Charles told me that his wife was idolized by his aunt and his sister who had become her bosom friend; that she was kind, affectionate, unassuming, and of a disposition which enforced affection. I was no less pleased with this favourable state of things than with the facility with which Christine was learning the Venetian dialect.

When M. Dandolo and I called at their house, Charles was not at home; Christine was alone with his two relatives. The most friendly welcome was proffered to us, and in the course of conversation the aunt praised the progress made by Christine in her writing very highly, and asked her to let me see her copy-book. I followed her to the next room, where she told me that she was very happy; that every day she discovered new virtues in her husband. He had told her, without the slightest appearance of suspicion of displeasure, that he knew that we had spent two days together in Treviso, and that he had laughed at the well- meaning fool who had given him that piece of information in the hope of raising a cloud in the heaven of their felicity.

Charles was truly endowed with all the virtues, with all the noble qualities of an honest and distinguished man. Twenty-six years afterwards I happened to require the assistance of his purse, and found him my true friend. I never was a frequent visitor at his house, and he appreciated my delicacy. He died a few months before my last departure from Venice, leaving his widow in easy circumstances, and three well- educated sons, all with good positions, who may, for what I know, be still living with their mother.

In June I went to the fair at Padua, and made the acquaintance of a young man of my own age, who was then studying mathematics under the celebrated Professor Succi. His name was Tognolo, but thinking it did not sound well, he changed it for that of Fabris. He became, in after years, Comte de Fabris, lieutenant-general under Joseph II., and died Governor of Transylvania. This man, who owed his high fortune to his talents, would, perhaps, have lived and died unknown if he had kept his name of Tognolo, a truly vulgar one. He was from Uderzo, a large village of the Venetian Friuli. He had a brother in the Church, a man of parts, and a great gamester, who, having a deep knowledge of the world, had taken the name of Fabris, and the younger brother had to assume it likewise. Soon afterwards he bought an estate with the title of count, became a Venetian nobleman, and his origin as a country bumpkin was forgotten. If he had kept his name of Tognolo it would have injured him, for he could not have pronounced it without reminding his hearers of what is called, by the most contemptible of prejudices, low extraction, and the privileged class, through an absurd error, does not admit the possibility of a peasant having talent or genius. No doubt a time will come when society, more enlightened, and therefore more reasonable, will acknowledge that noble feelings, honour, and heroism can be found in every condition of life as easily as in a class, the blood of which is not always exempt from the taint of a misalliance.