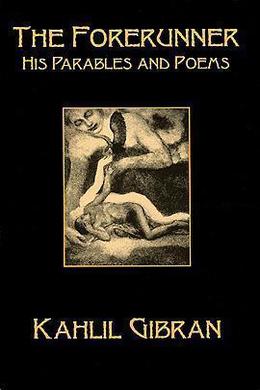 His Parables and Poems

The wisdom, poetic outlook, and deep humanity for which Gibran’s best-known work, The Prophet, is famous are also amply present in The Forerunner, published just 3 years earlier. Heartfelt and compassionate, it is a memorable, internationally acclaimed collection of 24 morality tales dealing with universal human concerns.

You are your own forerunner, and the towers you have builded are but the foundation of your giant-self. And that self too shall be a foundation.

And I too am my own forerunner, for the long shadow stretching before me at sunrise shall gather under my feet at the noon hour. Yet another sunrise shall lay another shadow before me, and that also shall be gathered at another noon.

Always have we been our own forerunners, and always shall we be. And all that we have gathered and shall gather shall be but seeds for fields yet unploughed. We are the fields and the ploughmen, the gatherers and the gathered.

And when you were a silent word upon life’s quivering lips, I too was there, another silent word. Then life uttered us and we came down the years throbbing with memories of yesterday and with longing for tomorrow, for yesterday was death conquered and tomorrow was birth pursued.

And now we are in God’s hands. You are a sun in His right hand and I an earth in His left hand. Yet you are not more, shining, than I, shone upon.

You are your own forerunner, you the stranger passing by the gate of my garden.

And I too am my own forerunner, though I sit in the shadows of my trees and seem motionless.

Once there came from the desert to the great city of Sharia a man who was a dreamer, and he had naught but his garment and staff.

And as he walked through the streets he gazed with awe and wonder at the temples and towers and palaces, for the city of Sharia was of surpassing beauty. And he spoke often to the passers-by, questioning them about their city - but they understood not his language, nor he their language.

At the noon hour he stopped before a vast inn. It was built of yellow marble, and people were going in and coming out unhindered.

“This must be a shrine,’ he said to himself, and he too went in. But what was his surprise to find himself in a hall of great splendour and a large company of men and women seated about many tables. They were eating and drinking and listening to the musicians.

‘Nay,’ said the dreamer. ‘This is no worshipping. It must be a feast given by the prince to the people, in celebration of a great event.’

At that moment a man, whom he took to be the slave of the prince, approached him, and bade him be seated. And he was served with meat and wine and most excellent sweets.

When he was satisfied, the dreamer rose to depart. At the door he was stopped by a large man magnificently arrayed.

‘Surely this is the prince himself,’ said the dreamer in his heart, and he bowed to him and thanked him.

Then the large man said in the language of the city:

‘Sir, you have not paid for your dinner.’ And the dreamer did not understand, and again thanked him heartily. Then the large man bethought him, and he looked more closely upon the dreamer. And he saw that he was a stranger, clad in but a poor garment, and that indeed he had not wherewith to pay for his meal. Then the large man clapped his hands and called - and there came four watchmen of the city. And they listened to the large man. Then they took the dreamer between them, and they were two on each side of him. And the dreamer noted the ceremoniousness of their dress and of their manner and he looked upon them with delight. ‘These,’ said he, ‘are men of distinction.’

And they walked all together until they came to the House of Judgement and they entered.

The dreamer saw before him, seated upon a throne, a venerable man with flowing beard, robed majestically. And he thought he was the king. And he rejoiced to be brought before him.

Now the watchmen related to the judge, who was the venerable man, the charge against the dreamer, and the judge appointed two advocates, one to present the charge and the other to defend the stranger. And the advocates rose, the one after the other, and delivered each his argument. And the dreamer thought himself to be listening to addresses of welcome, and his heart filled with gratitude to the king and the prince for all that was done for him.

Then sentence was passed upon the dreamer, that upon a tablet about his neck his crime should be written, and that he should ride through the city on a naked horse, with a trumpeter and a drummer before him. And the sentence was carried out forthwith.