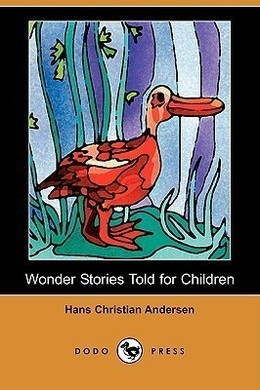 For Andersen, 1845 is heralded as a breakthrough year in which four different translations of his fairy tales were published. The Little Mermaid appeared in the periodical Bentley’s Miscellany, and was shortly followed by this, a second volume entitled Wonderful Stories for Children (source: Wikipedia). Contents include:

There is nobody in all this world who knows so many tales as Olé Luckoiè! He can tell tales! In an evening, when a child sits so nicely at the table, or on its little stool, Olé Luckoiè comes. He comes so quietly into the house, for he walks without shoes; he opens the door without making any noise, and then he flirts sweet milk into the children’s eyes; but so gently, so very gently, that they cannot keep their eyes open, and, therefore, they never see him; he steals softly behind them and blows gently on their necks, and thus their heads become heavy. Oh yes! But then it does them no harm; for Olé Luckoiè means nothing but kindness to the children, he only wants to amuse them; and the best thing that can be done is for somebody to carry them to bed, where they may lie still and listen to the tales that he will tell them.

Now when the children are asleep, Olé Luckoiè sits down on the bed; he is very well dressed; his coat is of silk, but it is not possible to tell what color it is, because it shines green, and red, and blue, just as if one color ran into another. He holds an umbrella under each arm; one of them is covered all over the inside with pictures, and this he sets over the good child, and it dreams all night long the most beautiful histories. The other umbrella has nothing at all within it; this he sets over the heads of naughty children, and they sleep so heavily, that next morning when they wake they have not dreamed the least in the world.

Now we will hear how Olé Luckoiè came every evening for a whole week to a little boy, whose name was Yalmar, and what he told him. There are seven stories, because there are seven days in a week.

“Just listen!” said Olé Luckoiè, in the evening, when they had put Yalmar in bed; “now I shall make things fine!”—and with that all the plants in the flower–pots grew up into great trees which stretched out their long branches along the ceiling and the walls, till the whole room looked like the most beautiful summer–house; and all the branches were full of flowers, and every flower was more beautiful than a rose, and was so sweet, that if anybody smelt at it, it was sweeter than raspberry jam! The fruit on the trees shone like gold, and great big bunches of raisins hung down—never had any thing been seen like it!—but all at once there began such a dismal lamentation in the table–drawer where Yalmar kept his school–books.

“What is that?” said Olé Luckoiè, and went to the table and opened the drawer. It was the slate that was in great trouble; for there was an addition sum on it that was added up wrong, and the slate–pencil was hopping and jumping about in its string, like a little dog that wanted to help the sum, but it could not! And besides this, Yalmar’s copy–book was crying out sadly! All the way down each page stood a row of great letters, each with a little one by its side; these were the copy; and then there stood other letters, which fancied that they looked like the copy; and these Yalmar had written; but they were some one way and some another, just as if they were tumbling over the pencil–lines on which they ought to have stood.

“Look, you should hold yourselves up—thus!” said the copy; “thus, all in a line, with a brisk air!”

“Oh! we would so gladly, if we could,” said Yalmar’s writing; “but we cannot, we are so miserable!”

“Then we will make you!” said Olé Luckoiè gruffly.

“Oh, no!” cried the poor little crooked letters; but for all that they straightened themselves, till it was quite a pleasure to see them.

“Now, then, cannot we tell a story?” said Olé Luckoiè; “now I can exercise them! One, two! One, two!” And so, like a drill–sergeant, he put them all through their exercise, and they stood as straight and as well–shaped as any copy. After that Olé Luckoiè went his way; and Yalmar, when he looked at the letters next morning, found them tumbling about just as miserably as at first.

No sooner was Yalmar in bed than Olé Luckoiè came with his little wand, and touched all the furniture in the room; and, in a minute, every thing began to chatter; and they chattered all together, and about nothing but themselves. Every thing talked except the old door–mat, which lay silent, and was vexed that they should be all so full of vanity as to talk of nothing but themselves, and think only about themselves, and never have one thought for it which lay so modestly in a corner and let itself be trodden upon.

There hung over the chest of drawers a great picture in a gilt frame; it was a landscape; one could see tall, old trees, flowers in the grass, and a great river, which ran through great woods, past many castles out into the wild sea.

Olé Luckoiè touched the picture with his wand; and with that the birds in the picture began to sing, the tree–branches began to wave, and the clouds regularly to move,—one could see them moving along over the landscape!