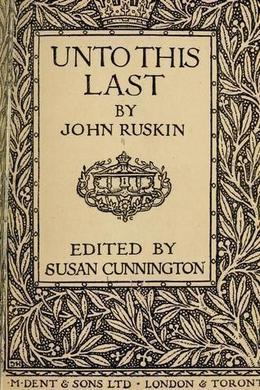 And Other Essays on Political Economy

A closely argued assault on the science of political economy, which dominated the Victorian period. Ruskin was a profoundly conservative man who looked back to the Middle Ages as a Utopia, yet his ideas had a considerable influence on the British socialist movement. And in making his powerful moral and aesthetic case against the dangers of unhindered industrialization he was strangely prophetic. This volume shows the astounding range and depth of Ruskin’s work, and in an illuminating introduction the editor reveals the consistency of Ruskin’s philosophy and his adamant belief that questions of economics, art and science could not be separated from questions of morality. In Ruskin’s words, ‘There is no Wealth but Life.’

The greater part of the following treatise remains in the exact form in which it was read at Manchester; but the more familiar passages of it, which were trusted to extempore delivery, have been since written with greater explicitness and fullness than I could give them in speaking; and a considerable number of notes are added, to explain the points which could not be sufficiently considered in the time I had at my disposal in the lecture-room.

Some apology may be thought due to the reader, for an endeavour to engage his attention on a subject of which no profound study seems compatible with the work in which I am usually employed. But profound study is not, in this case, necessary either to writer or reader, while accurate study, up to a certain point, is necessary for us all. Political economy means, in plain English, nothing more than “citizens’ economy”; and its first principles ought, therefore, to be understood by all who mean to take the responsibility of citizens, as those of household economy by all who take the responsibility of householders. Nor are its first principles in the least obscure: they are, many of them, disagreeable in their practical requirements, and people in general pretend that they cannot understand, because they are unwilling to obey them; or, rather, by habitual disobedience, destroy their capacity of understanding them. But there is not one of the really great principles of the science which is either obscure or disputable–which might not be taught to a youth as soon as he can be trusted with an annual allowance, or to a young lady as soon as she is of age to be taken into counsel by the housekeeper.

I might, with more appearance of justice, be blamed for thinking it necessary to enforce what everybody is supposed to know. But this fault will hardly be found with me, while the commercial events recorded daily in our journals, and still more the explanations attempted to be given of them, show that a large number of our so-called merchants are as ignorant of the nature of money as they are reckless, unjust, and unfortunate in its employment.

The statements of economical principle given in the text, though I know that most, if not all, of them are accepted by existing authorities on the science, are not supported by references, because I have never read any author on political economy, except Adam Smith, twenty years ago. Whenever I have taken up any modern book upon this subject, I have usually found it encumbered with inquiries into accidental or minor commercial results, for the pursuit of which an ordinary reader could have no leisure, and, by the complication of which, it seemed to me, the authors themselves had been not unfrequently prevented from seeing to the root of the business.

Finally, if the reader should feel inclined to blame me for too sanguine a statement of future possibilities in political practice, let him consider how absurd it would have appeared in the days of Edward I. if the present state of social economy had been then predicted as necessary, or even described as possible. And I believe the advance from the days of Edward I. to our own, great as it is confessedly, consists, not so much in what we have actually accomplished, as in what we are now enabled to conceive.