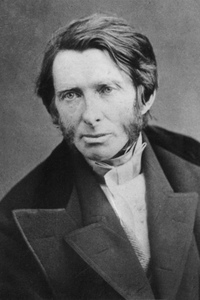 A leading English art critic of the Victorian era, art patron, draughtsman, watercolourist, prominent social thinker and philanthropist. Ruskin wrote on subjects ranging from geology to architecture, myth to ornithology, literature to education, and botany to political economy. His writing styles and literary forms were equally varied. Ruskin penned essays and treatises, poetry and lectures, travel guides and manuals, letters and even a fairy tale. The elaborate style that characterised his earliest writing on art was later superseded by a preference for plainer language designed to communicate his ideas more effectively. In all of his writing, he emphasised the connections between nature, art and society. He also made detailed sketches and paintings of rocks, plants, birds, landscapes, and architectural structures and ornamentation.

He was hugely influential in the latter half of the 19th century, and up to the First World War. After a period of relative decline, his reputation has steadily improved since the 1960s with the publication of numerous academic studies of his work. Today, his ideas and concerns are widely recognised as having anticipated interest in environmentalism, sustainability and craft. (source Wikipedia)

A fairy tale of what happened to two men who tried to get rich in evil ways and of how the fortune they sought came to their younger brother, whose kind...read more »

The Seven Lamps of Architecture (1849)

A classic work by the great Victorian expresses his deepest convictions about the nature and role of architecture and its aesthetics. Though Ruskin hims...read more »

A closely argued assault on the science of political economy, which dominated the Victorian period. Ruskin was a profoundly conservative man who looked ...read more »