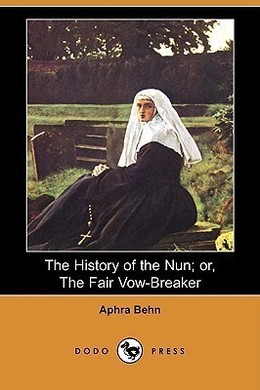 The History of the Nun

Behn’s remarkable work in which she analyzes the retribution of breaking the vows, particularly the religious vows undertaken by nuns. The tale, claimed to be true, focuses on a nun who was lured by the charms of the world into forsaking the nunnery. Fate comes down hard upon her as she has to face the troubles and threats posed by the outside world as well.

Of all the sins, incident to Human Nature, there is none, of which Heaven has took so particular, visible, and frequent Notice, and Revenge, as on that of Violated Vows, which never go unpunished; and the Cupids may boast what they will, for the encouragement of their Trade of Love, that Heaven never takes cognisance of Lovers broken Vows and Oaths, and that ‘tis the only Perjury that escapes the Anger of the Gods; But I verily believe, if it were search’d into, we should find these frequent Perjuries, that pass in the World for so many Gallantries only, to be the occasion of so many unhappy Marriages, and the cause of all those Misfortunes, which are so frequent to the Nuptiall’d Pair. For not one of a Thousand, but, either on his side, or on hers, has been perjur’d, and broke Vows made to some fond believing Wretch, whom they have abandon’d and undone. What Man that does not boast of the Numbers he has thus ruin’d, and, who does not glory in the shameful Triumph? Nay, what Woman, almost, has not a pleasure in Deceiving, taught, perhaps, at first, by some dear false one, who had fatally instructed her Youth in an Art she ever after practis’d, in Revenge on all those she could be too hard for, and conquer at their own Weapons? For, without all dispute, Women are by Nature more Constant and Just, than Men, and did not their first Lovers teach them the trick of Change, they would be Doves, that would never quit their Mate, and, like Indian Wives, would leap alive into the Graves of their deceased Lovers, and be buried quick with ‘em. But Customs of Countries change even Nature her self, and long Habit takes her place: The Women are taught, by the Lives of the Men, to live up to all their Vices, and are become almost as inconstant; and ‘tis but Modesty that makes the difference, and, hardly, inclination; so deprav’d the nicest Appetites grow in time, by bad Examples.

But, as there are degrees of Vows, so there are degrees of Punishments for Vows, there are solemn Matrimonial Vows, such as contract and are the most effectual Marriage, and have the most reason to be so; there are a thousand Vows and Friendships, that pass between Man and Man, on a thousand Occasions; but there is another Vow, call’d a Sacred Vow, made to God only; and, by which, we oblige our selves eternally to serve him with all Chastity and Devotion: This Vow is only taken, and made, by those that enter into Holy Orders, and, of all broken Vows, these are those, that receive the most severe and notorious Revenges of God; and I am almost certain, there is not one Example to be produc’d in the World, where Perjuries of this nature have past unpunish’d, nay, that have not been persu’d with the greatest and most rigorous of Punishments. I could my self, of my own knowledge, give an hundred Examples of the fatal Consequences of the Violation of Sacred Vows; and who ever make it their business, and are curious in the search of such Misfortunes, shall find, as I say, that they never go unregarded.

The young Beauty therefore, who dedicates her self to Heaven, and weds her self for ever to the service of God, ought, first, very well to consider the Self-denial she is going to put upon her youth, her fickle faithless deceiving Youth, of one Opinion to day, and of another to morrow; like Flowers, which never remain in one state or fashion, but bud to day, and blow by insensible degrees, and decay as imperceptibly. The Resolution, we promise, and believe we shall maintain, is not in our power, and nothing is so deceitful as human Hearts.

I once was design’d an humble Votary in the House of Devotion, but fancying my self not endu’d with an obstinacy of Mind, great enough to secure me from the Efforts and Vanities of the World, I rather chose to deny my self that Content I could not certainly promise my self, than to languish (as I have seen some do) in a certain Affliction; tho’ possibly, since, I have sufficiently bewailed that mistaken and inconsiderate Approbation and Preference of the false ungrateful World, (full of nothing but Nonsense, Noise, false Notions, and Contradiction) before the Innocence and Quiet of a Cloyster; nevertheless, I could wish, for the prevention of abundance of Mischiefs and Miseries, that Nunneries and Marriages were not to be enter’d into, ‘till the Maid, so destin’d, were of a mature Age to make her own Choice; and that Parents would not make use of their justly assum’d Authority to compel their Children, neither to the one or the other; but since I cannot alter Custom, nor shall ever be allow’d to make new Laws, or rectify the old ones, I must leave the Young Nuns inclos’d to their best Endeavours, of making a Virtue of Necessity; and the young Wives, to make the best of a bad Market.