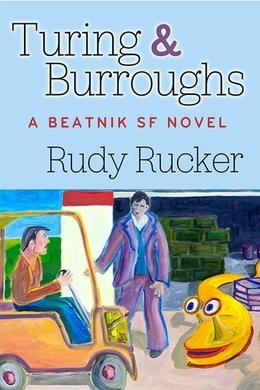 What if Alan Turing, founder of the modern computer age, escaped assassination by the secret service to become the lover of Beat author William Burroughs? What if they mutated into giant shapeshifting slugs, fled the FBI, raised Burroughs’s wife from the dead, and tweaked the H-bombs of Los Alamos? A wild beatnik adventure, compulsively readable, hysterically funny, with insane warps and twists-and a bad attitude throughout.

It was a rainy Sunday night, June 6, 1954. Alan Turing was walking down a liquidly lamp-lit street to the Manchester railway station, wearing a long raincoat with a furled umbrella concealed beneath. His Greek paramour Zeno was due on the 9 p. m. train, having taken a ferry from Calais. And, no, the name had no philosophical import, it was simply the boy’s given name—although it was indeed the case that at times dear Zeno could protract a seemingly finite interval of time into an endless sum of ever-subtler pleasures. Not that he’d think of it that way.

If all went well, Zeno and Alan would be spending the night together in the sepulchral Manchester Midland travelers’ hotel—Alan’s own home nearby was watched. He’d booked the hotel room under a pseudonym.

Barring any intrusions from the morals squad, Alan and Zeno would set off bright and early tomorrow for a lovely week of tramping across the hills of the Lake District, free as rabbits, sleeping in serendipitous inns. Alan sent up a fervent prayer, if not to God, then to the deterministic universe’s initial boundary condition.

Surely the cosmos bore no distinct animus towards homosexuals, and the world might yet grant some peace to the tormented, fretful gnat labeled Alan Turing. But it was by no means a given that the assignation with Zeno would click. Last spring, the suspicious authorities had deported Alan’s Norwegian flame Kjell straight back to Bergen before Alan even saw him.

It was as if Alan’s persecutors supposed him likely to be teaching his men top-secret code-breaking algorithms, rather than sensually savoring his rare hours of private joy. Although, yes, Alan did relish playing the tutor, and it was in fact conceivable that he might feel the urge to discuss those topics upon which he’d worked during the war years. After all, it was no one but he, Alan Turing, who’d been the brains of the British cryptography team at Bletchley Park, cracking the Nazi Enigma code and shortening the War by several years—little thanks that he’d ever gotten for that.

The churning of a human mind is unpredictable, as is the anatomy of the human heart. Alan’s work on universal machines and computational morphogenesis had convinced him that the world is both deterministic and overflowing with endless surprise. His proof of the unsolvability of the Halting Problem had established, at least to Alan’s satisfaction, that there could never be any shortcuts for predicting the figures of Nature’s stately dance.

Few but Alan had as yet grasped the new order. The prating philosophers still supposed, for instance, that there must be some element of randomness at play in order that each human face be slightly different. Far from it. The differences were simply the computation-amplified results of disparities among the embryos and their wombs—with these disparities stemming in turn from the cosmic computation’s orderly growth from the universe’s initial conditions.

Of late Alan had been testing his ideas with experiments involving the massed cellular computations by which a living organism transforms egg to embryo to adult. Input acorn—output oak. He’d already published his results involving the dappling of a brindle cow, but his latest experiments were so close to magic that he was holding them secret, wanting to refine the work in the alchemical privacy of his starkly under-furnished home. Should all go well, a Nobel prize might grace the burgeoning field of computational morphogenesis. This time Alan didn’t want a droning gas-bag like Alonzo Church to steal his thunder—as had happened with the Hilbert Entscheidungsproblem.

Alan glanced at his watch. Only three minutes till the train arrived. His heart was pounding. Soon he’d be committing lewd and lascivious acts (luscious phrase) with a man in England. To avoid a stint in jail, he’d sworn to abjure this practice—but he’d found wiggle room for his conscience. Given that Zeno was a visiting Greek national, he wasn’t, strictly speaking, a “man in England,” assuming that “in” was construed to mean “who is a member citizen of.” Chop the logic and let the tree of the Knowledge of Good and Evil fall, soundless in the moldering woods.

It had been nearly a year since Alan had enjoyed manly love—last summer on the island of Corfu with none other than Zeno, who’d taken Alan for a memorable row in his dory, a series of golden instants fused into a lambent flow. Alan had just been coming off his court-ordered estrogen treatments, but that hadn’t mattered. In Alan’s case the hormones had in fact produced no perceptible reduction in his libido. The brain, after all, was the most sensitive sex organ of them all. By now he’d suffered a year’s drought, and he was randy as a hat rack. He felt as if his whole being were on the surface of his skin.