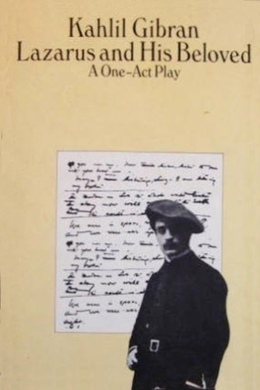 Lazarus and his Beloved

The garden outside of the home of Lazarus and his mother and sisters in Bethany Late afternoon of Manday, the day after the resurrection of Jesus of Nazareth from the grave. At curtain rise: Mary is at right gazing up towards the hills. Martha is seated at her loom near the house door, left. The Madman is seated around the corner of the house, and against its wall, down left.

Mary: (Turning to Martha) You do not work. You have not worked much lately.

Martha: You are not thinking of my work. My idleness makes you think of what our Master said. Oh, beloved Master!

The Madman: The day shall come when there will be no weaver, and no one to wear the cloth. We shall all stand naked in the sun.

(There is a long silence. The women do not appear to have heard The Madman speaking. They never hear him.)

Mary: It is getting late.

Martha: Yes, yes, I know. It is getting late.

(The mother enters, coming out from the house door.)

Mother: Has he not returned yet?

Martha: No, mother, he has not returned yet.

(The three women look towards the hills.)

The Madman: He himself will never return. All that you may see is a breath struggling in a body.

Mary: It seems to me that he has not yet returned from the other world.

Mother: The death of our Master has afflicted him deeply, and during these last days he has hardly eaten a morsel, and I know at night that he does not sleep. Surely it must have been the death of our Friend.

Martha: No, mother. There is something else; something I do not understand.

Mary: Yes, yes. There is something else. I know it, too. I have known it all these days, yet I cannot explain it. His eyes are deeper. He gazes at me as though he were seeing someone else through me. He is tender but his tenderness is for someone not here. And he is silent, silent as if the seal of death is yet upon his lips.

(A silence falls over the three women.)

The Madman: Everyone looks through everyone else to see someone else.

Mother: (Breaking the silence) Would that he’d return. Of late he has spent too many hours among those hills alone. He should be here with us.

Mary: Mother, he has not been with us for a long time.

Martha: Why, he has always been with us, only those three days!

Mary: Three days? Three days! Yes, Martha, you are right. It was only three days.

Mother: I wish my son would return from the hills.

Martha: He will come soon, mother. You must not worry.

Mary: (in a strange voice) Sometimes I feel that he will never come back from the hills.

Mother: If he came back from the grave, the surely he will come back from the hills. And oh, my daughters, to think that the One who gave us back his life was slain but yesterday.

Mary: Oh the mystery of it, and the pain of it.

Mother: Oh, to think that they could be so cruel to the One who gave my son back to my heart.

Martha: But Lazarus should not stay so long among the hills.

Mary: It is easy for one in a dream to lose his way among the olive groves. And I know a place where Lazarus loved to sit and dream and be still. Oh, mother, it is beside a little stream. If you do not know the place you could not find it. He took me there once, and we sat on two stones, like children. It was spring, and little flowers were growing beside us. We often spoke of that place during the winter season. And each time that he spoke of that place a strange light came into his eyes.

The Madman: Yes, that strange light, that shadow cast by the other light.

Mary: And mother, you know that Lazarus has always been away from us, though he was always with us.

Mother: You say so many things I cannot understand. (Pause) I wish my son would come back from the hills. I wish he would come back! (Pause) I must go in now. The lentils must not be overcooked.

(The mother exits through the door)

Martha: I wish I could understand all that you say, Mary. When you speak it is as though someone else is speaking.

Mary: (Her voice a little strange) I know, my sister, I know. Whenever we speak it is someone else who is speaking.

(There is a prolonged silence. Mary is faraway in her thoughts, and Martha watches her half-curiously. Lazarus enters, coming from the hills, back left. He throws himself upon the grass under the almond trees near the house.)

Mary: (Running toward him) Oh Lazarus, you are tired and weary. You should not have walked so far.

Lazarus: (Speaking absently) Walking, walking and going nowhere; seeking and finding nothing. But it is better to be among the hills.

The Madman: Well, after all it is a cubit nearer to the other hills.

Martha: (After brief silence) But you are not well, and you leave us all day long, and we are much concerned. What you came back, Lazarus, you made us happy. But in leaving us alone here you turn our happiness into anxiety.

Martha: You have been gone all day.

Lazarus: To think, to think! A whole day among the hills! Who would believe it?