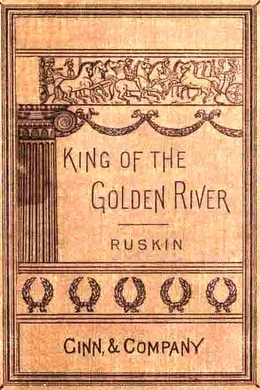 The King of the Golden River

The Black Brothers: A Legend of Stiria

A fairy tale of what happened to two men who tried to get rich in evil ways and of how the fortune they sought came to their younger brother, whose kind and loving heart prompted him to right action. Widely regarded as a masterpiece of 19th century stories for children.

In a secluded and mountainous part of Stiria there was, in old time, a valley of the most surprising and luxuriant fertility. It was surrounded, on all sides, by steep and rocky mountains, rising into peaks, which were always covered with snow, and from which a number of torrents descended in constant cataracts. One of these fell westward, over the face of a crag so high, that, when the sun had set to everything else, and all below was darkness, his beams still shone full upon this waterfall, so that it looked like a shower of gold. It was, therefore, called by the people of the neighbourhood, the Golden River. It was strange that none of these streams fell into the valley itself. They all descended on the other side of the mountains, and wound away through broad plains and by populous cities. But the clouds were drawn so constantly to the snowy hills, and rested so softly in the circular hollow, that in time of drought and heat, when all the country round was burnt up, there was still rain in the little valley; and its crops were so heavy, and its hay so high, and its apples so red, and its grapes so blue, and its wine so rich, and its honey so sweet, that it was a marvel to every one who beheld it, and was commonly called the Treasure Valley.

The whole of this little valley belonged to three brothers, called Schwartz, Hans, and Gluck. Schwartz and Hans, the two elder brothers, were very ugly men, with over-hanging eyebrows and small dull eyes, which were always half shut, so that you couldn’t see into them, and always fancied they saw very far into you. They lived by farming the Treasure Valley, and very good farmers they were. They killed everything that did not pay for its eating. They shot the blackbirds, because they pecked the fruit; and killed the hedgehogs, lest they should suck the cows; they poisoned the crickets for eating the crumbs in the kitchen; and smothered the cicadas, which used to sing all summer in the lime trees. They worked their servants without any wages, till they would not work any more, and then quarrelled with them, and turned them out of doors without paying them. It would have been very odd, if with such a farm, and such a system of farming, they hadn’t got very rich; and very rich they did get. They generally contrived to keep their corn by them till it was very dear, and then sell it for twice its value; they had heaps of gold lying about on their floors, yet it was never known that they had given so much as a penny or a crust in charity; they never went to mass; grumbled perpetually at paying tithes; and were, in a word, of so cruel and grinding a temper, as to receive from all those with whom they had any dealings, the nickname of the “Black Brothers.”

The youngest brother, Gluck, was as completely opposed, in both appearance and character, to his seniors as could possibly be imagined or desired. He was not above twelve years old, fair, blue-eyed, and kind in temper to every living thing. He did not, of course, agree particularly well with his brothers, or rather, they did not agree with him. He was usually appointed to the honourable office of turnspit, when there was anything to roast, which was not often; for, to do the brothers justice, they were hardly less sparing upon themselves than upon other people. At other times he used to clean the shoes, floors, and sometimes the plates, occasionally getting what was left on them, by way of encouragement, and a wholesome quantity of dry blows, by way of education.

Things went on in this manner for a long time. At last came a very wet summer, and everything went wrong in the country around. The hay had hardly been got in, when the haystacks were floated bodily down to the sea by an inundation; the vines were cut to pieces with the hail; the corn was all killed by a black blight; only in the Treasure Valley, as usual, all was safe. As it had rain when there was rain no where else, so it had sun when there was sun no where else. Every body came to buy corn at the farm, and went away pouring maledictions on the Black Brothers. They asked what they liked, and got it, except from the poor people, who could only beg, and several of whom were starved at their very door, without the slightest regard or notice.