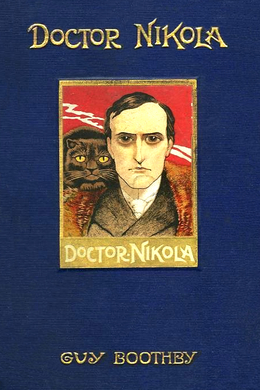 Wilfred Bruce and Doctor Nikola set off for Tibet in search of a secret society “ten times as powerful as any government or priesthood in the world.” Its members can extend life, perform magic, and raise the dead. With these miracles at his command, Nikola knows he can change the world. Using his talent for disguise, he plans to penetrate the forbidden citadel and learn its hidden mysteries…

It was Saturday afternoon, about a quarter-past four o’clock if my memory serves me, and the road, known as the Maloo, leading to the Bubbling Well, that single breathing place of Shanghai, was crowded. Fashionable barouches, C-spring buggies, spider-wheel dogcarts, to say nothing of every species of ‘rickshaw, bicycle, and pony, were following each other in one long procession towards the Well. All the European portion of Shanghai, and a considerable percentage of the native, had turned out to witness the finish of the paper hunt, which, though, not exciting in itself, was important as being the only amusement the settlement boasted that afternoon. I had walked as far as the Horse Bazaar myself, and had taken a ‘rickshaw thence, more from pride than because I could afford it. To tell the truth, which will pop out sooner or later, however much I may try to prevent it, I was keeping up appearances, and though I lay back in my vehicle and smoked my cheroot with a princely air, I was painfully conscious of the fact that when the ride should be paid for the exchequer would scarcely survive the shock.

Since my arrival in Shanghai I had been more than usually unfortunate. I had tried for every billet then vacant, from those choice pickings at the top of the tree among the high gods, to the secretaryship of a Eurasian hub of communistical tendencies located somewhere on the confines of the native city, but always without success. For the one I had not the necessary influence, for the other I lacked that peculiar gift of obsequiousness which is so essential to prosperity in that particular line of business.

In the meantime my expenditure was going remorselessly on, and I very soon saw that unless something happened, and that quickly too, I had every prospect of hiding myself deprived of my belongings, sleeping on the Bund, and finally figuring in that Mixed Court in the Magistrate’s Yamen, which is so justly dreaded by every Englishman, as the debtor of a Cochin China Jew. The position was not a cheerful one, look at it in whatever light I would, but I had experienced it a good many times before, and had always come out of it, if not with an increased amount of self-respect, certainly without any very great degree of personal embarrassment.

Arriving at the Well, I paid off my coolie and took up a position near “the last jump,” which I noticed was a prepared fence and ditch of considerable awkwardness. I was only just in time, for a moment later the horses came at it with a rush; some cleared it, some refused it, while others, adopting a middle course, jumped on the top of it, blundered over, and finally sent their riders spinning over their heads into the mud at the feet of their fairest friends. It was not exactly an aesthetic picture, but it was certainly a very amusing one.

When the last horse, had landed, imagining the sport to be over for the day, I was in the act of moving away when there was a shout to stand clear, and wheeling round again, I was just in time to see a last horseman come dashing at the fence. Though he rode with considerable determination, and was evidently bent on putting a good finish to his day’s amusement, it was plain that his horse was not of the same way of thinking, for, when he was distant about half a dozen yards from the fence, he broke his stride, stuck his feet into the mud, and endeavoured to come to a standstill. The result was not at all what he expected; he slid towards the fence, received his rider’s quirt, viciously administered, round his flank, made up his mind to jump too late, hit the top rail with his forehead, turned a complete somersault, and landed with a crash at my feet. His rider fell into the arms of the ditch, out of which I presently dragged him. When I got him on the bank he did not look a pretty sight, but, on the other hand, that did not prevent him from recognizing me.

“Wilfred Bruce, by all that’s glorious!” he cried, at the same time rising to his feet and mopping his streaming face with a very muddy pocket-handkerchief. “This is a fortunate encounter, for do you know, I spent two hours this morning looking for you?”

“I am very sorry you should have had so much trouble,” I answered; “but are you sure you are not hurt?”

“Not in the least,” he answered, and when he had scraped off as much mud as possible, turned to his horse, which had struggled to his feet and was gazing stupidly about him.

“Let me first send this clumsy brute home,” he said, “then I’ll find my cart, and if you’ll permit me I’ll take you back to town with me.”

We saw the horse led away, and, when we had discovered his dog-cart among the crowd of vehicles waiting for their owners, mounted to our seats and set off–after a few preliminary antics on the part of the leader–on our return to the settlement.