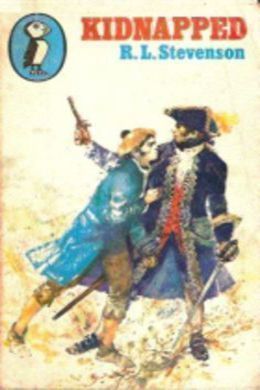 Set in Scotland after the Jacobite rebellion, young David Balfour leaves home and goes to the sinister House of Shaws. There, he finds himself kidnapped, the victim of his uncle’s plot to cheat him of his inheritance, aboard a ship bound for America. He teams up with the Jacobite loyalist and spy, Alan Breck and they take on the ship’s crew in a courageous battle but are soon shipwrecked. Later, they find themselves suspected of the murder of ‘Red Fox’, a notorious enemy of the Jacobeans. They flee across the Highlands in a perilous journey back to David’s home where he finally claims his inheritance. Kidnapped provided much of the inspiration for John Buchan’s The Thirty Nine Steps and a generation of subsequent thrillers.

I will begin the story of my adventures with a certain morning early in the month of June, the year of grace 1751, when I took the key for the last time out of the door of my father’s house. The sun began to shine upon the summit of the hills as I went down the road; and by the time I had come as far as the manse, the blackbirds were whistling in the garden lilacs, and the mist that hung around the valley in the time of the dawn was beginning to arise and die away.

Mr. Campbell, the minister of Essendean, was waiting for me by the garden gate, good man! He asked me if I had breakfasted; and hearing that I lacked for nothing, he took my hand in both of his and clapped it kindly under his arm.

“Well, Davie, lad,” said he, “I will go with you as far as the ford, to set you on the way.” And we began to walk forward in silence.

“Are ye sorry to leave Essendean?” said he, after awhile.

“Why, sir,” said I, “if I knew where I was going, or what was likely to become of me, I would tell you candidly. Essendean is a good place indeed, and I have been very happy there; but then I have never been anywhere else. My father and mother, since they are both dead, I shall be no nearer to in Essendean than in the Kingdom of Hungary, and, to speak truth, if I thought I had a chance to better myself where I was going I would go with a good will.”

“Ay?” said Mr. Campbell. “Very well, Davie. Then it behoves me to tell your fortune; or so far as I may. When your mother was gone, and your father (the worthy, Christian man) began to sicken for his end, he gave me in charge a certain letter, which he said was your inheritance. ‘So soon,’ says he, ‘as I am gone, and the house is redd up and the gear disposed of’ (all which, Davie, hath been done), ‘give my boy this letter into his hand, and start him off to the house of Shaws, not far from Cramond. That is the place I came from,’ he said, ‘and it’s where it befits that my boy should return. He is a steady lad,’ your father said, ‘and a canny goer; and I doubt not he will come safe, and be well lived where he goes.’”

“Nay,” said Mr. Campbell, “who can tell that for a surety? But the name of that family, Davie, boy, is the name you bear–Balfours of Shaws: an ancient, honest, reputable house, peradventure in these latter days decayed. Your father, too, was a man of learning as befitted his position; no man more plausibly conducted school; nor had he the manner or the speech of a common dominie; but (as ye will yourself remember) I took aye a pleasure to have him to the manse to meet the gentry; and those of my own house, Campbell of Kilrennet, Campbell of Dunswire, Campbell of Minch, and others, all well-kenned gentlemen, had pleasure in his society. Lastly, to put all the elements of this affair before you, here is the testamentary letter itself, superscrived by the own hand of our departed brother.”

He gave me the letter, which was addressed in these words: “To the hands of Ebenezer Balfour, Esquire, of Shaws, in his house of Shaws, these will be delivered by my son, David Balfour.” My heart was beating hard at this great prospect now suddenly opening before a lad of seventeen years of age, the son of a poor country dominie in the Forest of Ettrick.

“Of a surety,” said the minister, “that would I, and without pause. A pretty lad like you should get to Cramond (which is near in by Edinburgh) in two days of walk. If the worst came to the worst, and your high relations (as I cannot but suppose them to be somewhat of your blood) should put you to the door, ye can but walk the two days back again and risp at the manse door. But I would rather hope that ye shall be well received, as your poor father forecast for you, and for anything that I ken come to be a great man in time. And here, Davie, laddie,” he resumed, “it lies near upon my conscience to improve this parting, and set you on the right guard against the dangers of the world.”

Here he cast about for a comfortable seat, lighted on a big boulder under a birch by the trackside, sate down upon it with a very long, serious upper lip, and the sun now shining in upon us between two peaks, put his pocket-handkerchief over his cocked hat to shelter him. There, then, with uplifted forefinger, he first put me on my guard against a considerable number of heresies, to which I had no temptation, and urged upon me to be instant in my prayers and reading of the Bible. That done, he drew a picture of the great house that I was bound to, and how I should conduct myself with its inhabitants.