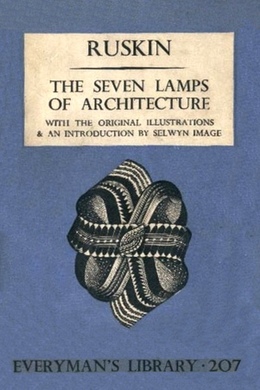 The Seven Lamps of Architecture

A classic work by the great Victorian expresses his deepest convictions about the nature and role of architecture and its aesthetics. Though Ruskin himself later called it “a wretched rant”, this book really paved the way for modern architectural history and criticism, laying down criteria by which to judge buildings which were not simply those of Vitruvius or Alberti dressed up in 18th-centtury tasteful finery. He puts forward an eloquent case, among other things for the preservation of historic buildings. This edition includes reproductions of the 14 original plates of Ruskin’s superb drawings of architectural details from such structures as the Doge’s Palace in Venice to the Cathedral of Rouen.

Architecture is the art which so disposes and adorns the edifices raised by man for whatsoever uses, that the sight of them contributes to his mental health, power and pleasure.

It is very necessary, in the outset of all inquiry, to distinguish carefully between Architecture and Building.

To build, literally to confirm, is by common understanding to put together and adjust the several pieces of any edifice or receptacle of a considerable size. Thus we have church building, house building, ship building, and coach building. That one edifice stands, another floats, and another is suspended on iron springs, makes no difference in the nature of the art, if so it may be called, of building or edification. The persons who profess that art, are severally builders, ecclesiastical, naval, or of whatever other name their work may justify; but building does not become architecture merely by the stability of what it erects; and it is no more architecture which raises a church, or which fits it to receive and contain with comfort a required number of persons occupied in certain religious offices, than it is architecture which makes a carriage commodious or a ship swift. I do not, of course, mean that the word is not often, or even may not be legitimately, applied in such a sense (as we speak of naval architecture); but in that sense architecture ceases to be one of the fine arts, and it is therefore better not to run the risk, by loose nomenclature, of the confusion which would arise, and has often arisen, from extending principles which belong altogether to building, into the sphere of architecture proper.

Let us, therefore, at once confine the name to that art which, taking up and admitting, as conditions of its working, the necessities and common uses of the building, impresses on its form certain characters venerable or beautiful, but otherwise unnecessary. Thus, I suppose, no one would call the laws architectural which determine the height of a breastwork or the position of a bastion. But if to the stone facing of that bastion be added an unnecessary feature, as a cable moulding, that is Architecture. It would be similarly unreasonable to call battlements or machicolations architectural features, so long as they consist only of an advanced gallery supported on projecting masses, with open intervals beneath for offence. But if these projecting masses be carved beneath into rounded courses, which are useless, and if the headings of the intervals be arched and trefoiled, which is useless, that is Architecture. It may not be always easy to draw the line so sharply and simply, because there are few buildings which have not some pretence or color of being architectural; neither can there be any architecture which is not based on building, nor any good architecture which is not based on good building; but it is perfectly easy and very necessary to keep the ideas distinct, and to understand fully that Architecture concerns itself only with those characters of an edifice which are above and beyond its common use. I say common; because a building raised to the honor of God, or in memory of men, has surely a use to which its architectural adornment fits it; but not a use which limits, by any inevitable necessities, its plan or details.