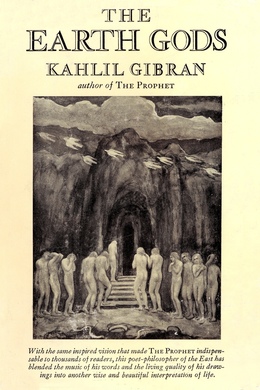 The last book to be published while Gibran was still in this world, came into the poet’s hands two weeks before he was to lay aside all earthly volumes. He had a peculiar feeling of tenderness for this book, unlike what he felt for any of the others. ‘Because,’ he said, ‘it was written out of the poet’s hell—a process of childbirth and child-bearing’. It is, in my opinion, one of the greatest poems in the language. The Earth Gods is, perhaps, a book for the mystic, a poet’s book for poets, for the initiate and the dreamer of vast dreams. Yet I have known those who pride themselves on being highly practical and feet-on-the-ground, who disown any bent toward the mystical and the occult, to pronounce it a book of wonder and power. And as a child of seven to whom I read portions of the poem on request, says unvaryingly, ‘Read it again!’ This, perhaps, for the music and the almost unearthly beauty of rhythm.

When the night of the twelfth aeon fell, And silence, the high tide of night, swallowed the hills, The three earth-born gods, the Master Titans of life, Appeared upon the mountains. Rivers ran about their feet; The mist floated across their breasts, And their heads rose in majesty above the world. Then they spoke, and like distant thunder Their voices rolled over the plains.

The wind blows eastward; I would turn my face to the south, For the wind crowds my nostrils with the odours of dead things.

It is the scent of burnt flesh, sweet and bountiful. I would breathe it.

It is the odour of mortality parching upon its own faint flame. Heavily does it hang upon the air, And like foul breath of the pit It offends my senses. I would turn my face to the scentless north.

It is the inflamed fragrance of brooding life This I would breathe now and forever. Gods live upon sacrifice, Their thirst quenched by blood, Their hearts appeased with young souls, Their sinews strengthened by the deathless sighs Of those who dwell with death; Their thrones are built upon the ashes of generations.

Weary is my spirit of all there is. I would not move a hand to create a world Nor to erase one. I would not live could I but die, For the weight of aeons is upon me, And the ceaseless moan of the seas exhausts my sleep. Could I but lose the primal aim And vanish like a wasted sun; Could I but strip my divinity of its purpose And breathe my immortality into space, And be no more; Could I but be consumed and pass from time’s memory Into the emptiness of nowhere!

Listen my brothers, my ancient brothers. A youth in yonder vale Is singing his heart to the night. His lyre is gold and ebony. His voice is silver and gold.

I would not be so vain as to be no more. I could not but choose the hardest way; To follow the seasons and support the majesty of the years; To sow the seed and to watch it thrust through the soil; To call the flower from its hiding place And give it strength to nestle its own life, And then to pluck it when the storm laughs in the forest; To raise man from secret darkness, Yet keep his roots clinging to the earth; To give him thirst for life, and make death his cupbearer; To endow him with love that waxeth with pain, And exalts with desire, and increases with longing, And fadeth away with the first embrace; To girdle his nights with dreams of higher days, And infuse his days with visions of blissful nights, And yet to confine his days and his nights To their immutable resemblance; To make his fancy like the eagle of the mountain, And his thought as the tempests of the seas, And yet to give him hands slow in decision, And feet heavy with deliberation; To give him gladness that he may sing before us, And sorrow that he may call unto us, And then to lay him low, When the earth in her hunger cries for food; To raise his soul high above the firmament That he may foretaste our tomorrow, And to keep his body grovelling in the mire That he may not forget his yesterday. Thus shall we rule man unto the end of time, Governing the breath that began with his mother’s crying, And ends with the lamentation of his children.