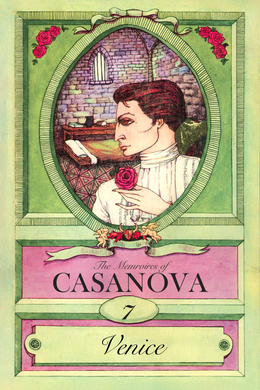 Followed by authorities of the Inquisition, Casanova fled from place to place and landed in Venice. Feeling comfortable in his birth place, he started working in the sphere of his interest and translated some works. Focusing on the life around him, this work depicts his experiences in a great manner.

Arrived, for the first time, in the capital of Austria, at the age of eight-and-twenty, well provided with clothes, but rather short of money- -a circumstance which made it necessary for me to curtail my expenses until the arrival of the proceeds of a letter of exchange which I had drawn upon M. de Bragadin. The only letter of recommendation I had was from the poet Migliavacca, of Dresden, addressed to the illustrious Abbe Metastasio, whom I wished ardently to know. I delivered the letter the day after my arrival, and in one hour of conversation I found him more learned than I should have supposed from his works. Besides, Metastasio was so modest that at first I did not think that modesty natural, but it was not long before I discovered that it was genuine, for when he recited something of his own composition, he was the first to call the attention of his hearers to the important parts or to the fine passages with as much simplicity as he would remark the weak ones. I spoke to him of his tutor Gravina, and as we were on that subject he recited to me five or six stanzas which he had written on his death, and which had not been printed. Moved by the remembrance of his friend, and by the sad beauty of his own poetry, his eyes were filled with tears, and when he had done reciting the stanzas he said, in a tone of touching simplicity,’Ditemi il vero, si puo air meglio’?

I answered that he alone had the right to believe it impossible. I then asked him whether he had to work a great deal to compose his beautiful poetry; he shewed me four or five pages which he had covered with erasures and words crossed and scratched out only because he had wished to bring fourteen lines to perfection, and he assured me that he had never been able to compose more than that number in one day. He confirmed my knowledge of a truth which I had found out before, namely, that the very lines which most readers believe to have flowed easily from the poet’s pen are generally those which he has had the greatest difficulty in composing.

“Which of your operas,” I enquired, “do you like best?”

“All your works have been translated in Paris into French prose, but the publisher was ruined, for it is not possible to read them, and it proves the elevation and the power of your poetry.”

“Several years ago, another foolish publisher ruined himself by a translation into French prose of the splendid poetry of Ariosto. I laugh at those who maintain that poetry can be translated into prose.”

“And you are right.”

He told me that he had never written an arietta without composing the music of it himself, but that as a general rule he never shewed his music to anyone.

“The French,” he added, “entertain the very strange belief that it is possible to adapt poetry to music already composed.”

And he made on that subject this very philosophical remark:

“You might just as well say to a sculptor, ‘Here is a piece of marble, make a Venus, and let her expression be shewn before the features are chiselled.’”

I went to the Imperial Library, and was much surprised to meet De la Haye in the company of two Poles, and a young Venetian whom his father had entrusted to him to complete his education. I believed him to be in Poland, and as the meeting recalled interesting recollections I was pleased to see him. I embraced him repeatedly with real pleasure.

He told me that he was in Vienna on business, and that he would go to Venice during the summer. We paid one another several visits, and hearing that I was rather short of money he lent me fifty ducats, which I returned a short time after. He told me that Bavois was already lieutenant-colonel in the Venetian army, and the news afforded me great pleasure. He had been fortunate enough to be appointed adjutant-general by M. Morosini, who, after his return from his embassy in France, had made him Commissary of the Borders. I was delighted to hear of the happiness and success of two men who certainly could not help acknowledging me as the original cause of their good fortune. In Vienna I acquired the certainty of De la Haye being a Jesuit, but he would not let anyone allude to the subject.

Not knowing where to go, and longing for some recreation, I went to the rehearsal of the opera which was to be performed after Easter, and met Bodin, the first dancer, who had married the handsome Jeoffroi, whom I had seen in Turin. I likewise met in the same place Campioni, the husband of the beautiful Ancilla. He told me that he had been compelled to apply for a divorce because she dishonoured him too publicly. Campioni was at the same time a great dancer and a great gambler. I took up my lodgings with him.