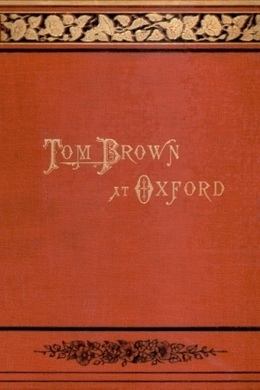 The follow-up to the much-beloved Tom Brown’s Schooldays, Thomas Hughes’ novel follows the rowdy but good-hearted protagonist as he leaves his school-boy days behind him and begins his academic career at university. Although the main character has matured, he still has the same proclivity for hijinks and finds himself entangled in a series of scrapes and mishaps.

In the Michaelmas term after leaving school, Tom Brown received a summons from the authorities, and went up to matriculate at St. Ambrose’s College, Oxford, He presented himself at the college one afternoon, and was examined by one of the tutors, who carried him, and several other youths in like predicament, up to the Senate House the next morning. Here they went through the usual forms of subscribing to the articles, and otherwise testifying their loyalty to the established order of things, without much thought perhaps, but in very good faith nevertheless. Having completed the ceremony, by paying his fees, our hero hurried back home, without making any stay in Oxford. He had often passed through it, so that the city had not the charm of novelty for him, and he was anxious to get home; where, as he had never spent an autumn away from school till now, for the first time in his life he was having his fill of hunting and shooting.

He had left school in June, and did not go up to reside at Oxford till the end of the following January. Seven good months; during a part of which he had indeed read for four hours or so a week with the curate of the parish, but the residue had been exclusively devoted to cricket and field sports. Now, admirable as these institutions are, and beneficial as is their influence on the youth of Britain, it is possible for a youngster to get too much of them. So it had fallen out with our hero. He was a better horseman and shot, but the total relaxation of all the healthy discipline of school, the regular hours and regular work to which he had been used for so many years, had certainly thrown him back in other ways. The whole man had not grown; so that we must not be surprised to find him quite as boyish, now that we fall in with him again, marching down to St. Ambrose’s with a porter wheeling his luggage after him on a truck as when we left him at the end of his school career.

Tom was in truth beginning to feel that it was high time for him to be getting to regular work again of some sort. A landing place is a famous thing, but it is only enjoyable for a time by any mortal who deserves one at all. So it was with a feeling of unmixed pleasure that he turned in at the St. Ambrose gates, and inquired of the porter what rooms had been allotted to him within those venerable walls.

While the porter consulted his list, the great college sundial, over the lodge, which had lately been renovated, caught Tom’s eye. The motto underneath, “Pereunt et imputantur,” stood out, proud of its new gilding, in the bright afternoon sun of a frosty January day: which motto was raising sundry thoughts in his brain, when the porter came upon the right place in his list, and directed him to the end of his journey: No. 5 staircase, second quadrangle, three pair back. In which new home we shall leave him to install himself, while we endeavor to give the reader some notion of the college itself.

St. Ambrose’s College was a moderate-sized one. There might have been some seventy or eighty undergraduates in residence, when our hero appeared there as a freshman. Of these, unfortunately for the college, there were a very large proportion of the gentleman-commoners; enough, in fact, with the other men whom they drew round them, and who lived pretty much as they did, to form the largest and leading set in the college. So the college was decidedly fast.

The chief characteristic of this set was the most reckless extravagance of every kind. London wine merchants furnished them with liqueurs at a guinea a bottle and wine at five guineas a dozen; Oxford and London tailors vied with one another in providing them with unheard-of quantities of the most gorgeous clothing. They drove tandems in all directions, scattering their ample allowances, which they treated as pocket money, about roadside inns and Oxford taverns with open hand, and “going tick” for everything which could by possibility be booked. Their cigars cost two guineas a pound; their furniture was the best that could be bought; pine-apples, forced fruit, and the most rare preserves figured at their wine parties; they hunted, rode steeple-chases by day, played billiards until the gates closed, and then were ready for vingt-et-une, unlimited loo, and hot drink in their own rooms, as long as anyone could be got to sit up and play.

The fast set then swamped, and gave the tone to the college; at which fact no persons were more astonished and horrified than the authorities of St. Ambrose.