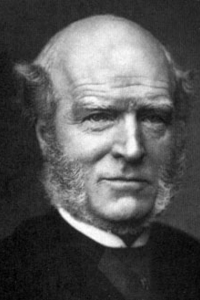 Thomas Hughes was an English lawyer, judge and author. He is most famous for his novel Tom Brown’s School Days, a semi-autobiographical work set at Rugby School, which Hughes had attended. It had a lesser-known sequel, Tom Brown at Oxford. Hughes had numerous other interests, in particular as a Member of Parliament, in the British co-operative movement, and in a settlement in Tennessee reflecting his values.

The follow-up to the much-beloved Tom Brown’s Schooldays, Thomas Hughes’ novel follows the rowdy but good-hearted protagonist as he leaves his school-bo...read more »

Tom’s second year starts at a private school, but due to an epidemic of fever in the area, all the school’s boys are sent home, and Tom is transferred m...read more »

Like modern young adults, Tom and the other boys at Rugby suffer pangs of separation from family, stand up against peer bullies, ponder the ambiguities ...read more »