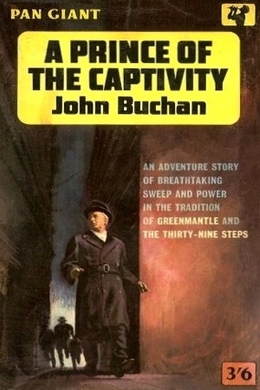 A Prince of the Captivity

This is the epic story of one man’s courage. Adam Melfort is an officer and a gentleman. A brilliant career lies ahead of him until he is imprisoned for a crime he did not commit. Afterwards, Adam embarks on daring missions in the service of his country. Dangerous work behind enemy lines in World War I and espionage in 1920s Germany are adventures he bravely undertakes.

On a warm June evening three men were sitting in the smoking-room of a London club. One was an old man, with a face which had once been weather-beaten and was now intricately seamed with veins and wrinkles. His bearing, his shoulders trimly squared even at seventy, spoke of the old style of British regimental officer. The second was in his early thirties, a heavy young man, with nothing of the Guardsman about him except his tie. The third might have been any age between forty and sixty, and had writ plain upon him the profession of the law.

The newsboys were shouting in Pall Mall.

“They can’t have got the verdict yet,” said the last. “Jenks was only beginning to sum up when I left. We shall hear nothing for another hour.”

The old man shivered. “Good God! It is awful to be waiting here to know whether Tom Melfort’s boy is to go to prison for six years or ten. I suppose there’s no chance of an acquittal.”

“None,” said the lawyer. “You see, he pled guilty. Leithen was his counsel, and I believe did his best to get him to change his mind. But the fellow was adamant.”

The young soldier, whose name was Lyson, shook his head.

“That was like Adam. There never was a more obstinate chap in his quiet way. Very easy and good-natured till you presumed just a little too much on his placidity, and then you found yourself hard up against a granite wall.”

“How well did you know him?” the lawyer asked.

“I was at school with him and we passed out of Sandhurst together. He was a friend, but not what you would call an intimate. Too clever, and a little too much of the wise youth…. Oh yes, he was popular, for he was a first-class sportsman and a good fellow, but he had a bit too much professional keenness for lazy dogs like me. After that he went straight ahead, as you know, and left us all behind. Somebody told me that old Mullins said he was the most brilliant man they had had at the Staff College for a generation. He had got a European war on the brain, and spent most of his leave tramping about the Ardennes or bicycling in Lorraine.”

“If this thing hadn’t happened, what would you have said about his character?”

“Sound as the Bank of England,” was the answer. “A trifle puritanical, maybe. I used to feel that if I ever did anything mean I should be more ashamed to face Adam Melfort than any other man alive. You remember how he looked, sir,” and he turned to the old man. “Always in training–walked with a light step as if he were on the hill after deer–terribly quick off the mark in an argument–all fine and hard and tightly screwed together. The grip of his small firm hand had a sort of electric energy. Not the kind of man you would think likely to take the wrong turning.”

“I am not very clear…. What exactly happened?” asked the old man.

“Common vulgar forgery,” the lawyer replied. “He altered a cheque which was made out to his wife–part of her allowance from a rich great-uncle. The facts were not in doubt, and he made no attempt to dispute them. He confessed what he had done, and explained it by a sudden madness. The funny thing was that he did not seem to be ashamed of it. He stood there quite cool and collected, with a ghost of a smile on his face, making admissions which he must have known were going to wreck him for good. You say he was wrapt up in his career, but I never saw anyone face a crash more coolly…. The absence of motive puzzles me. Were the Melforts hard up? They never behaved as if they were.”

“Adam was supposed to be fairly well off. He was an only son, and his father died years ago. But I fancy his lady wife made the money fly.”

“I saw her in the witness-box,” said the lawyer. “Pretty as a picture and nicely dressed for the part. She gave her evidence in a voice like music and wept most becomingly. Even old Jenks was touched…. Poor little soul! It isn’t much fun for her…. Who was she, by the way? Somebody told me she was Irish.”

“She was Camilla Considine,” said Lyson. “Sort of far-away cousin of my own. Adam first met her hunting with the Meath. I haven’t seen a great deal of them lately, but I shouldn’t have said that the marriage was made in Heaven. Oh yes! She was–she is– angelically pretty, with spun-gold hair and melting blue eyes–the real fairy-tale princess type. But I never considered that she had the mind of a canary. She can’t be still, but hops from twig to twig, and her twigs were not the kind of perch that Adam fancied. They each went pretty much their own way. There was a child that died, you know, and after that there was nothing to hold them together…. Adam had his regimental duties, and, when he got leave, as I have said, he was off to some strategic corner of Europe. Camilla hunted most of the winter–she rode superbly, and there were plenty of people ready to mount her–and in London she was always dancing about. You couldn’t open a picture-paper without seeing her photograph.